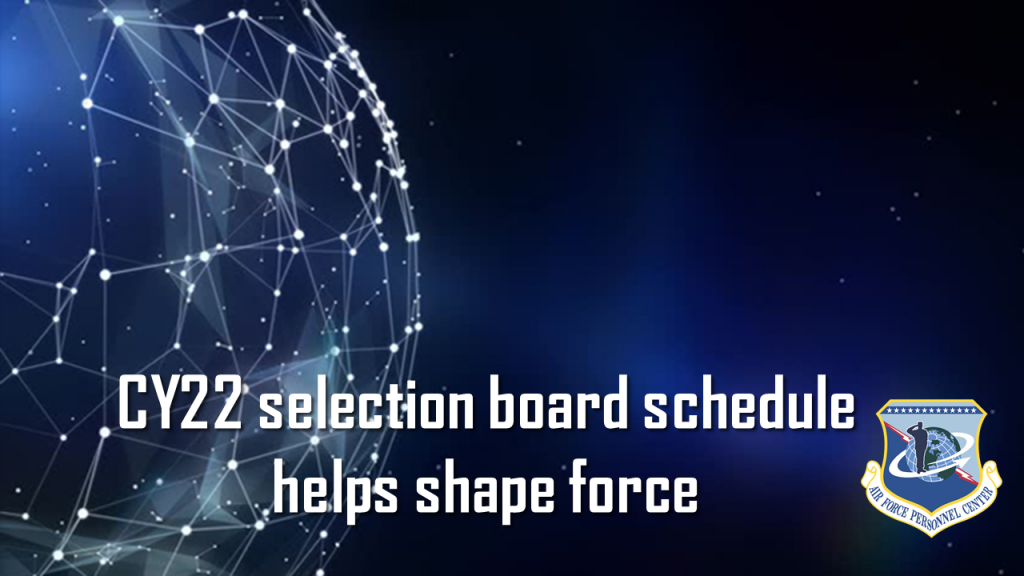 AUGUST 17, 2021 – The Department of the Air Force recently published the Calendar Year 2022 Air and Space Force Selection Board schedules, identifying when thousands of Airmen and Guardians will compete for promotion, helping shape and develop the force.

The upcoming schedule will see several changes from previous years, ranging from accelerating some promotion boards, adding a new Line of the Air Force developmental category, and supporting two separate board schedules for the Air and Space Force.

In order to ensure the department has the force it needs, the Lt Col LAF-C (Combat Support) DevCat board will convene in January 2022, separate from the remaining LAF DevCats (A/F/I/N/X) meeting in March.

Other CY22 changes include:

“Having separate developmental categories for the LAF gives us added flexibility to balance and sustain the force by decoupling board timing when necessary,” Arcuri said. “In this case, the Combat Support AFSCs will meet their board two months earlier than last year, which allows earlier processing of the results and earlier pin-on dates to address shortages in some LAF-C career fields.”

“The new category consists primarily of Foreign Area Officers (FAOs) who now have their own Air Force Specialty Code,” Arcuri added. “LAF-X consists of only Majors and above, so officers in the LAF-X DevCat will compete for lieutenant colonel in March and for colonel in March/April.”

“This continues a trend of moving the Colonels’ promotion boards earlier in the year to better align with the Colonel assignment process,” Arcuri added.

“We are challenging the status quo and making necessary changes today so we are ready for tomorrow,” Arcuri said. “The decisions and changes made for the upcoming board schedules were deliberate and focused on ensuring we have the right mix of Airmen and Guardians who can compete, deter and win in the high-end fight.”

For more information on the selection boards, visit the myPers website.