The mission of the Special Forces Group is to plan, prepare for, and when directed, deploy to conduct unconventional warfare, foreign internal defense, special reconnaissance and direct actions in support of U.S. national policy objectives within designated areas of responsibility. The units continually train to conduct unconventional warfare in any of its forms — Guerrilla Warfare, Evasion and Escape, Subversion, and Sabotage. The soldiers are also schooled in direct action operations and special reconnaissance. Approximately 1,400 soldiers are assigned to each group. The 12-man "A" Team is the key operating element of the Special Forces Group.

In this case, the Army’s Fifth Special Forces group is dedicated to the area of operation in southwest Asia. So, team members of that group will speak the local languages, will be experts in the countries that they’re dedicated to. They’ll understand the culture, the geography, the demographics, and the militaries of those countries. Those men are at home in the countries that they’re dedicated to, and in most cases they’ll have spent a great deal of time working in friendly countries within that region. They’re characterized by small units. They can move and operate freely and quietly with the local populace.

– Special Forces can trace their history back to Rogers’ Rangers of the American Revolution.

– Special Forces duty can be as much intellectual and diplomatic as it is war fighting. Many of the enlisted personnel are college graduates.

– Special Forces units are designed to operate either unilaterally or in support of and combined with indigenous military and paramilitary forces.

Warnings:
Officers and enlisted personnel must pass the same tests.

A Special Forces candidate must be a U.S. citizen; be an active-duty, male soldier; be airborne-qualified or volunteer for airborne training; be able to swim 50 meters wearing boots and battle-dress uniform; score a minimum of 206 points on the Army physical fitness test; meet medical fitness standards; and be eligible for a "secret" security clearance.

The Army’s Special Forces is a strategic, multi-purpose force capable of rapid response to various contingencies around the world. Called "Green Berets," these highly-skilled Soldiers are trained in unconventional warfare, foreign internal defense, direct action, special reconnaissance, combating terrorism, information operations and counter-proliferation. They operate in urban, jungle, desert, mountain, maritime and arctic environments and are sometimes called on to survive for months at a time behind enemy lines. But their missions aren’t just related to combat. Special Forces Soldiers are diplomats and teachers who are trained in foreign languages and are called on to teach military skills to people around the world. The Green Berets also support global humanitarian relief efforts.

Special Forces candidates must be mature and self-motivated; open and humble; and better conditioned physically and emotionally than the average Soldier.

Received fame during the Vietnam war, these soldiers are specialists at working with the local population. Their role could be crucial to developing solid intelligence. The Northern Alliance, rebels who oppose the Taliban, hold significant ground and could provide another great staging point for attacks by the United States.

How to Become a Green Beret
President Kennedy called the Green Beret "a symbol of excellence, a badge of courage, a mark of distinction in the fight for freedom." The U.S. Army’s Special Forces work in A-Teams, 12-member units, in the spirit of the Green Beret motto, "De Oppresso Liber" – to free the oppressed

1. Prepare yourself physically and mentally, and keep yourself in top condition.

3. Remember also that Special Forces troopers are fluent in at least one of 11 languages other than English. Take a foreign language in school.

4. Develop your body – run for endurance, train with weights, become a proficient swimmer.

9. Become a dedicated professional soldier – strive to exceed the expectations of your leaders, and apply for advanced training.

12. Prepare yourself for the Special Forces application requirements. For example, a candidate must make a 12-mile road march carrying a 55-lb rucksack and a weapon in 4.5 hours.

14. Appear before the U.S. Army Special Operations Command Assessment and Review Board. 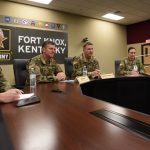