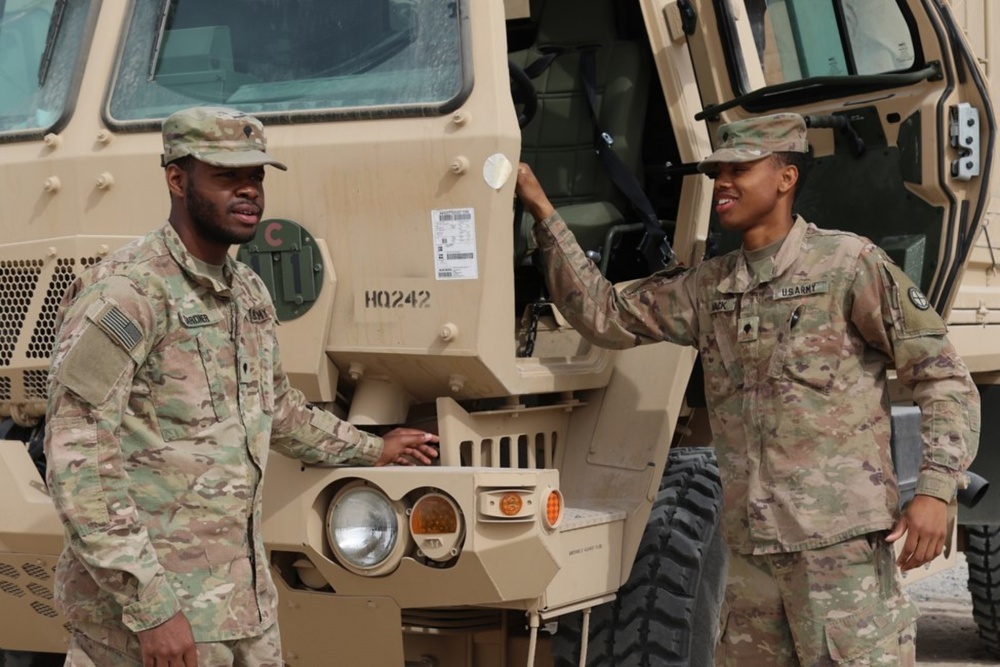 JANUARY 26, 2018, Camp Arifjan, Kuwait – After more than 17 years of U.S. troop involvement in the war in the Middle East, the word ‘deployment’ has become more common place than ever. So much so, that for most National Guard and Reserve Soldiers, the question isn’t if they will deploy, but when. Soldiers of the 35th Infantry Division, currently deployed in the Middle East, weighed-in with their deployment experiences and perspectives.

The U.S. is currently in more of a partner-building and advisory role based upon lessons learned and in an effort to develop an exchange and sharing of ideas for the best methodologies and doctrines. There’s a strong focus on interoperability in theater operations, which lends itself to optimal effectiveness in battle, according to Lt. Col. Perry Tangen, operations officer, 35th Inf. Div.

“We’ve been involved extensively in development, coordination, and synchronization of various operational engagement programs,” said Tangen. “We’ve also been involved in intelligence development and future planning. We’re working to enhance and improve our interoperability in all of these areas.”

Working together, the U.S. and its allies have the opportunity to rehearse and gain an in-depth personal understanding of one another’s methodologies at every level. The importance of understanding capabilities and methods before engaging an enemy force cannot be understated, Tangen explained.

Interoperability allows the combined forces to take immediate action, rather than having to learn in the midst of battle. The depth of familiarity and intrinsic knowledge makes for a particularly lethal partnership force.

“The most gratifying thing for me since I have been here is seeing the development of a program from concept all the way to action with the Soldiers,” said Tangen. “Actually seeing that program that we might have started on a whiteboard or on a piece of paper, being able to put that on a plan and take it all the way to fruition—that to me is the most gratifying thing I’ve done here.”

Over the past nearly two decades of war, positive changes have taken place and the experience of a deployment today can be different for current Soldiers than those who served even five years ago in the Middle East. Until they arrive in theater, troops can only imagine what their deployment will actually entail.

Much of the conjecturing is based upon information shared by Soldiers who have deployed in the past, or from news and Hollywood portrayals.

“I didn’t know what to think. I really didn’t know what to look forward to or what to expect,” said Spc. Lawrence Gardner, supply specialist and generator mechanic, 35th Inf. Div. “Seeing deployments from movies and everything like that; it was kind of like a scary feeling. I envisioned it looking like we were in a combat zone—basically, like in Afghanistan or Iraq, sleeping in tents, ducking and dodging bullets—so that’s more what I expected.”

Although not the war zone many expected, none of these troops could deny the intense heat some regions of the Middle East experience in the summertime.

“I it was not a fan of the weather when we first got here,” said Gardner. “I have never felt heat like this before in my life. It was crazy!” Spc. Terry Mack, supply specialist, 35th Inf. Div. concurred.

“When we first got here and I got off the plane, I was on baggage detail,” said Mack. “They had the engines on the planes going. Somebody told me it is going to feel just like a blow-dryer hitting you in the face constantly. That’s exactly what I experienced.”

Advice from comrades is valuable, but it’s important to keep in mind that due to steady improvements, a battle buddy’s experience may be vastly different than that of troops deploying in future rotations.

“I envisioned that we would be staying in tents and eating MRE’s all the time—but it’s not like that, obviously,” said Spc. Stephanie Fordyce, intelligence analyst, 35th Inf. Div. “Not seeing my family has been the biggest challenge for me here. The most challenging thing for me, work-wise, was when I first got here I was not really confident at what I had to do. As time has gone on, I have learned, and my leadership has been really good. They’ve helped me a lot and now I am comfortable and I enjoy going to work every day.”

According to Fordyce, being on deployment has helped her to become a better worker and will likely be a positive force in her future career endeavors.

“I think there are probably going to be transferable skills that I take back with me from this experience,” said Fordyce. “I have had to use my brain here more. I have attained a better work ethic since I have been here. I have never had to work a six-day work week schedule, so it is going to be easier when I go back home.”

Fordyce credits her leadership with her improved work ethic and enhanced confidence.

“The best part about being here is that my leadership is easy to talk to—they’re hard workers and it has rubbed off on me. They make sure the job gets done. I have learned how to be a better leader from them. They take good care of their Soldiers. It motivates me, so that when I get promoted I will take care of my Soldiers,” said Fordyce.

Gardner and Mack also found benefit in their deployment experiences.

“Job-wise, I’ve actually learned a lot more about mechanics than I knew before we came over here,” said Gardner. “When I changed over to working with supply, I learned a great deal about logistics. These are things I can take back to the civilian world and add to my resume. I have also met people in my unit that I don’t think I would have met otherwise.”

Being deployed has allowed Mack to gain a new perspective on his life and readjust priorities.

“When I was home I felt like I was living life fast. I was going to college. I was working full time. I was doing my Army stuff too,” said Mack. “I was just in a grind. I never had time to think and plan stuff out. Now that I’ve been in Kuwait, I’ve had the time to reassess and readjust and look at the decisions I have made. I have had a chance to determine what I did and didn’t like and decide how I want to move forward. It has given me perspective.”

These troops expressed appreciation for the opportunity to serve their country as well as a deep sense of gratitude for the support and kindness of the American citizens that have reached out to deployed troops.

“Being deployed can be hard,” said Fordyce. “But it is really rewarding to get letters and things from people back home. We’re so appreciative and it means a lot. It is great having their support and it is great being over here to do the job we’re doing.”