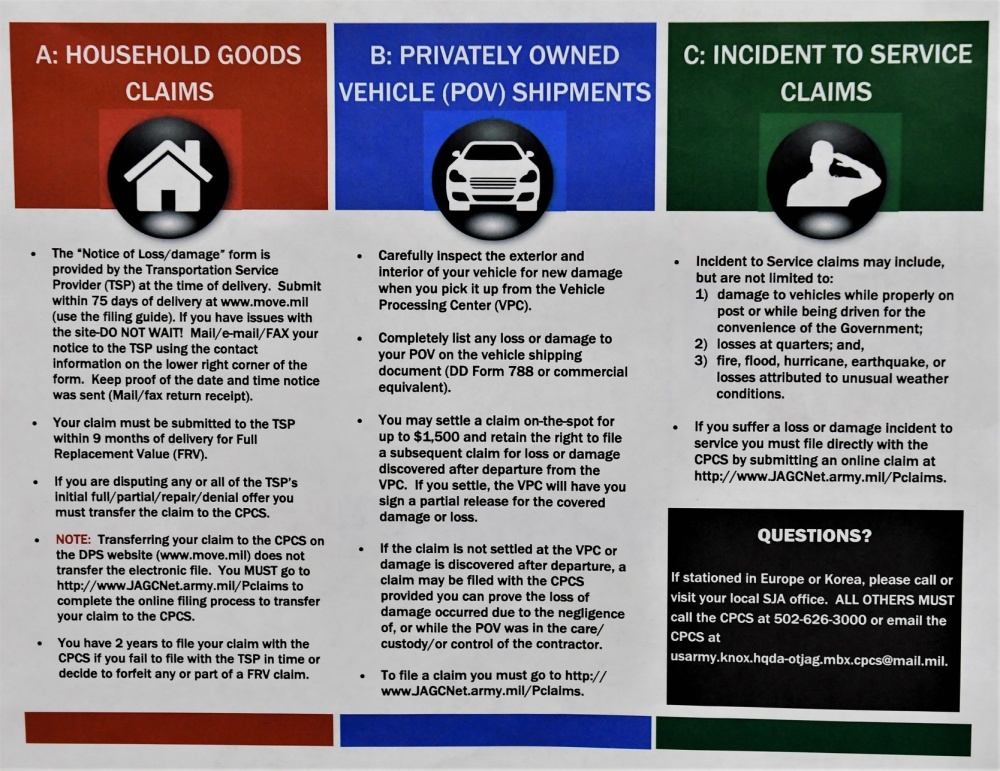 JUNE 4, 2019 – The stories are as varied as the Soldiers who have experienced them —

Your car door panel was pried open and is busted; you open your 55″ TV packing box only to find it filled with clothes; you’re at work when a hailstorm hits, leaving golf-ball sized dents all over your car.

Whether you’ve moved to a new duty station, deployed overseas, or just lived and worked at an Army installation, chances are you have suffered damage or loss of your property at some point. You have a friend at the Center for Personnel Claims Support.

Julie Snyder, supervisor at the U.S. Army Claims Service Center, said all Soldiers and authorized federal employees are entitled to full replacement or repair of their property — whichever is cheaper at the transportation service provider’s option — if an item is lost or damaged during a move.

“In order to qualify for that, the Soldiers have to file their claim first with the transportation service provider,” said Snyder. That is done at move.mil (see link below), the Defense Personal Property System.

Soldiers file for lost or damaged property by filling out a “Notice of Loss/Damage” form provided by the TSP within 75 days of delivery.

“That does not constitute the filing of a claim,” said Snyder. “That’s just making notice of the loss or damage.”

After filing notice, Soldiers then have nine months to go back into the Defense Personal Property System and complete the actual claim for reimbursement.

Snyder said all is not lost if Soldiers fail to get their claims filed within the nine-month window.

“They actually have two years to file their claim with us,” Snyder said. “They have to notify the TSP within the 75 days, bottom line.”

However, there’s a catch for filing with TSP late or with CPCS.

“If they don’t make the nine-month period, they can file with the TSP but they’re subject to depreciation at that time. So after nine months, depreciation takes effect,” Snyder said. “They can send the claim to us anytime, but we always have to apply depreciation.

“If they file with the TSP, they’re actually better off if they meet that nine-month criteria because the TSP can pay more than the Army can.”

Snyder explained that each item depreciates differently, depending on the quality of the product’s craftsmanship. The depreciation rate of most products maxes out at 75%.

Snyder said there are steps that Soldiers should keep in mind when preparing for a move to reduce or mitigate problems. One is protecting pets while household goods are being packed.

“We have seen instances where a cat got in a mattress box being shipped from Europe,” said Snyder. “It was dead by the time it arrived here.”

Another step is to safeguard valuables.

The most common theft items she sees claims for: televisions and OCIE issued military gear.

“Now that the Army is having members move the OCIE with them, OCIE is a hot theft item,” said Snyder. “Believe it or not, we see it a lot in the South; Alabama, Georgia; Tennessee because people are using it as hunting gear.”

Snyder offered another word of advice regarding inventory sheets — monitor them closely.

“Definitely monitor them, and ensure their more expensive items are spelled out on the sheets,” said Snyder. “The latest trend is theft of these new high-dollar tennis shoes — Air Jordans and Kobes; $400 and $500 tennis shoes. They should make sure that those are listed on their high-value inventory.

“Expensive purses should always be listed as well. And it’s always helpful if claimants photograph items.”

Snyder said her team of claims agents are always ready and willing to help out with answers to concerns and more advice, or travelers can go to move.mil for a wealth of information.