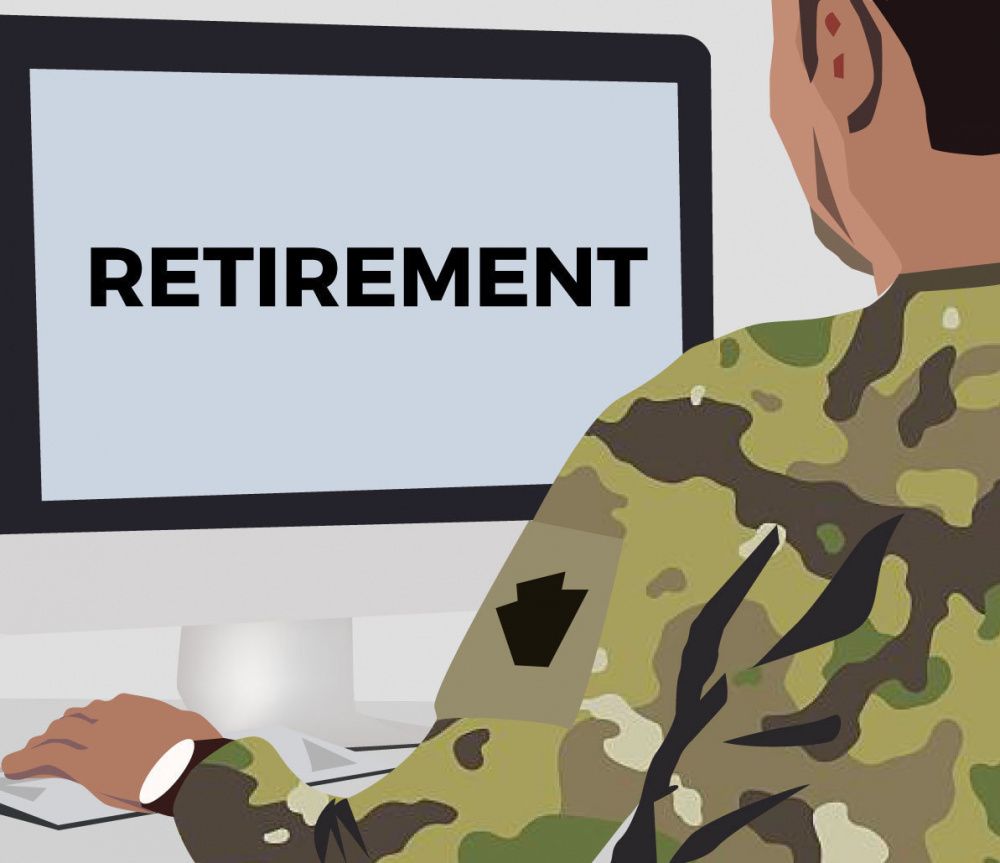 FEBRUARY 23, 2021 – While COVID-19 has affected many aspects of life for many people, it has not stopped Pennsylvania National Guard members from retiring when it’s their time.

However, COVID restrictions have made gathering information about retirement a little more challenging, and the Pennsylvania Army and Air National Guards are adapting.

The briefings are non-regular – M-day – retirement briefings and geared toward Soldiers who have over 18 years creditable toward retirement. They cover a variety of topics, including types of retirements, VA compensation, retired pay calculation, separation options, retirement application, cost of living allowance, survivor benefits, life insurance and Tricare.

Capt. Ryan Fallon, chief of the Personnel Accountability and Strength Reporting Branch, said the briefings began in January 2021 as part of his directorate’s goal to educate the force on the benefits afforded to them as they approach retirement.

“Since COVID-19 protocols have limited our ability to hold in-person briefings, these have all taken place digitally,” Fallon said. “These briefings are immensely beneficial for our Soldiers due to the fact that retirement transition involves many moving parts that the average Soldier may not be familiar with. The briefings give them a clear and concise overview of the entire transition and allow for questions to be asked directly to our retirement services team.”

“The more you know about your benefits the better, if you don’t know what’s out there, you will never know what or where to ask,” he said. “Retirement can be very complex when there are issues. I spend most of my day assisting others to resolve issues both minor and major ones.”

Anyone interested in registering for a webinar should email their name, rank, MS Teams account name, unit and duty position to ng.paarng.mbx.jfhq-g1-retirement-services-webinar@mail.mil. Registration will be accepted up to three days prior to each scheduled webinar.

On the Air side, each of the Pennsylvania Air National Guard’s three wings – the 111th Attack Wing, 171st Air Refueling Wing and 193rd Special Operations Wing – hold their own retirement briefings.

For the 111th ATW, each unit commander’s support staff engage directly with members who are nearing retirement. Prior to COVID-19, the 111th Force Support Squadron provided quarterly briefs that were open to all wing members.

The 111th is planning to begin holding virtual briefings in April 2021. The briefings have been in the works for some time now, but it has not yet been decided how frequently they will be held.

The 171st ARW has a SharePoint page with all its retirement information and is working on a brochure that will be shared with customers. One-on-one briefings are available by request.

Angela Stateler, Pennsylvania Air National Guard Military Personnel Management Officer, said it is important for those approaching retirement to attend any briefings that are offered and gather any information that is available.

“Retirement benefits can differ greatly from one military member to another, so it is important for a service member to seek individualized guidance to ensure they know what does and does not apply to them,” she said. “Among the differences that can impact retirement benefits include when a military member entered the service, what status they served in, how many times they deployed, and if they have dependents.”