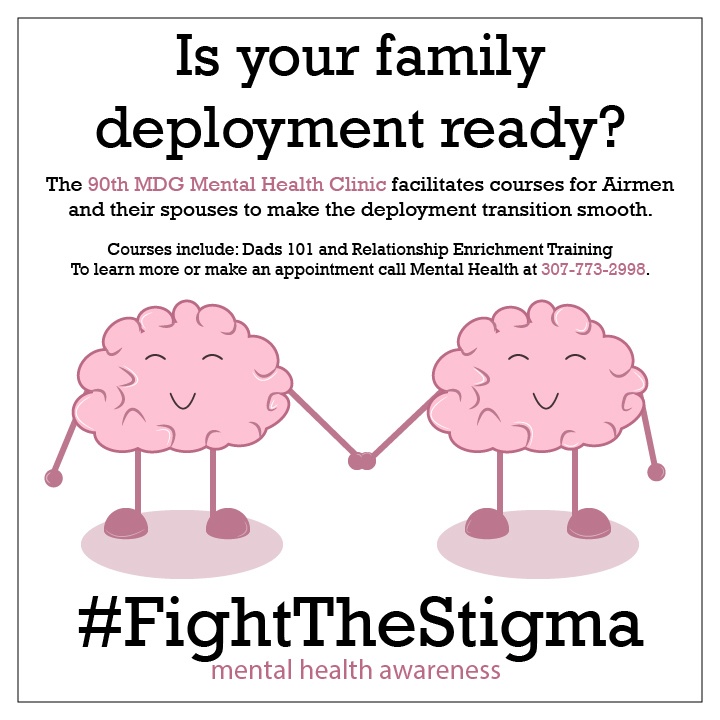 JUNE 6, 2019 – As military families prepare for their Airmen to deploy, the spouse may take care of themselves last. Fortunately, there are many programs available for families preparing for deployment.

“When the service member is deployed, it requires the spouse the step up and assume more responsibility,” said Glenn Garcia, 90th Medical Group Intervention Specialist. “We have programs that help a family work through some issues before they get out of hand and require intervention.”

The 90th Medical Group Mental Health Clinic provides various programs for Airmen and their spouses to make the deployment transition easier. Some of these include Crucial Conversations and Accountability, Relationship Enrichment Training, Divorce and Cooperative Parenting, and Dads 101 Instructional Seminar.

As Air Force veteran Jon Stevens prepared for deployment, he became distant from his family. Knowing the separation would be hard, he went through the pre-deployment checklist with tunnel vision like precision. Eventually began fighting with his wife days before leaving.

“Looking back on my time in the military and leaving for deployment, I should have gotten help, but I was scared,” said Stevens. “There is a huge stigma around getting help and I didn’t want to be that guy.”

While the importance of these programs cannot be overstated, Garcia noted the stigma still remains around mental health. There are many assumptions of the effects of visiting the clinic such as medical boards or impact on work.

“We don’t want to feed into the stigma, we want to get the proactive programs out there,” said Garcia. “We don’t keep medical documentation of your visit and we only notify your leadership if you are on special duty such as PRP.”

All the programs provided by Family Advocacy are private sessions with the Airman or the couple. They are available for active duty and their dependents, regardless of the deployment status.

Upon returning from deployment, Stevens suffered from daily panic attacks. He hid them fearing that he would seem weak.

“After about 6 months of panic attacks I finally sought help,” said Stevens. “Being in the clinic was actually pretty chill and the doctor talked to me as a human. After several appointments, the root cause of my anxiety was found and I began a four-week program to get around it. As I got better, my wife and I were able to take a course to mend our relationship.”

If you and your spouse are going through life transitions and would like assistance, seek help and fight the stigma around mental health by calling 307-773-2998.