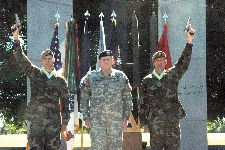 BEST RANGER
World Premiere: Thursday, June 16, 8-11 PM
Forty-six men, 60 continuous hours of competition and a multitude of mind and body-breaking extreme challenges. It’s a grueling three days for the competing teams of Army Rangers, all vying for one overwhelming objective”being named BEST RANGER. Army Rangers are considered the best of the best the Army has trained, and since 1982, the Best Ranger Competition has challenged two-man Ranger teams in events that test their physical conditioning, Ranger skills and team strategies. For the 2005 event, Military Channel was given unprecedented access to capture the entire competition. The three-part special provides viewers with the back stories on the participating Rangers, covers the competition’s events, profiles the two-man winning team and shows the emotional awards ceremony. The Best Ranger Competition events are purposely scheduled back-to-back and around the clock for 60 hours, allowing little time for rest and meals. The competition is conducted on a “come as you are” basis, with no tasks or events announced prior to the competition, but Rangers know from previous years that events will most likely include weapons firing, extended road marches, land navigation courses, Ranger skills and parachute jumps. In the end, less that half the teams that start the intense competition will finish, in what is the ultimate Army Olympics”the Best Ranger Competition. BEST RANGER, Military Channel’s three-hour special on the competition, covers the Army’s annual Best Ranger Competition of April 2005.

CLASH OF THE GENERALS
U.S. Premiere: Thursday, June 2, 8-9 PM
Who was the world’s greatest general? Was Alexander the Great a better tactician than Hannibal? Military experts Sir Peter de la Billiere and General Chuck Horner champion their foremost military hero in CLASH OF THE GENERALS. They extol the abilities of their chosen commander and take us to the scene of the commander’s greatest battle, showing us how each general won his most famous victory. Horner and de la Billiere then go head-to-head in a computer simulated battle, using the troops and tactics of their heroes, to see which of the chosen generals would come out on top if they had every really met on the battlefield.

BATTLEFIELD DIARIES: D-DAY”FIRST MEN IN
World Premiere: Monday, June 6, 10-11 PM [TV-14(V)]
June 1944″all across England , the Allied Expeditionary Force prepares to initiate the boldest invasion attempt in the history of modern warfare. Nearly 7,000 ships, 12,000 planes and more than 325,000 combat troops are primed to storm Hitler’s Fortress Europe. Among these ranks are more than 20,000 airborne troops. They will be the first to breach the heavily defended Atlantic wall by parachute and glider into occupied France . On June 5th, at 2200 hours, paratroopers of the 82nd and 101st U.S. Airborne Divisions are given the order to “chute up.” Soon, the roar of C-47 and Halifax engines will course over the runways of England . D-Day has begun. This program focuses on members of the 82nd “All American” Airborne Division, some of the first American troops to land behind enemy lines on D-Day, to commemorate the anniversary of this pivotal battle.

BATTLE PLAN
One of the most important aspects of any battle is often overlooked in the telling of war stories: the strategy. BATTLE PLAN takes viewers into the heart of famous battles, examining precisely how the commanders planned and fought. Through detailed analysis and historical comparison, we’ll see how famous strategies were developed and executed.

The Defensive Battle
Sometimes a battle plan can be based on knowing the enemy will come to you and exhaust himself before a counterstrike is mounted. This program looks at the battle plan requirements for a defensive battle and applies them to two major case studies: the Battle of Marne, 1914, in which Paris itself was under threat and the Battle of Kursk, 1943, in which the Red Army knew that the Germans were determined to take the offensive again on the great salient around the city of Kursk.

Guerilla Warfare
From the earliest days of organized warfare, it has been apparent that a numerically and technologically superior force can be ground down by irregular tactics. But it is rare that this battle plan alone can lead to victory unless there is either a failure of political will on the other side, or eventually a defeat by a conventional force. This episode looks into the history and principles of guerrilla warfare and analyzes the requirements of its battle plan from two perspectives”those waging guerrilla warfare, and those opposing it”and then applies this to several examples, including the Spanish guerillas of the Peninsula War, the Communist guerilla insurrection in 1950s Malaya and the Tet Offensive of the Vietnam War.

D-Day
It was the pivotal day of World War II – the largest military operation in history”when 160,000 allied infantrymen converged on the beaches of Normandy to break through the impenetrable walls of the German-held fortress of Europe. It was D-Day”June 6, 1944.