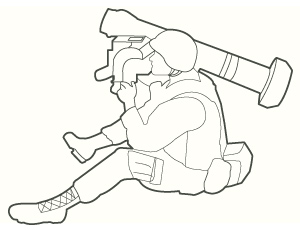 Javelin’s two major components are a reusable command launch unit (CLU) and a missile sealed in a disposable launch tube assembly. The CLU’s integrated day/night site provides target engagement capability in adverse weather and countermeasure environments. The CLU also may be used by itself for battlefield surveillance and reconnaissance. Javelin is fielded with no specific test measurement or diagnostic equipment – allowing our forces to deploy rapidly and unencumbered.

Javelin’s fire-and-forget guidance mode enables gunners to fire and then immediately take cover, greatly increasing survivability. Special features include a selectable top-attack or direct-fire mode (for targets under cover or for use in urban terrain against bunkers and buildings), target lock-on before launch, and a very limited back-blast that enables gunners to safely fire from enclosures and covered fighting positions.

Javelin can also be installed on tracked, wheeled or amphibious vehicles.