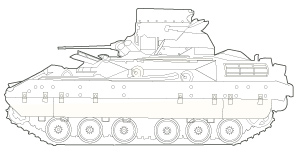 Provides protected transport of an infantry squad on the battlefield and overwatching fires to support the dismounted infantry; is employed to suppress and defeat enemy tanks, reconnaissance vehicles, infantry fighting vehicles, armored personnel carriers, bunkers, dismounted infantry and attack helicoptors; and performs cavalry scout and other essential (Bradley-equipped fire support and Stinger teams) missions in the 21st century. The infantry version (M2) is used most often to close with the enemy by means of fire and maneuver. The primary tasks performed by the cavalry version (M3) as part of a troop and/or squadron are reconnaissance, security and flank guard missions.