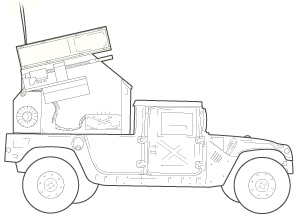 The system consists of a gyro-stabilized air defense turret mounted on a modified heavy High Mobility Multipurpose Wheeled Vehicle (HMMWV). The turret has two Stinger missile launcher pods, each capable of firing up to 4 fire-and-forget infrared/ultraviolet guided missiles in rapid succession. Avenger can be linked to the Forward Area Air Defense Command, Control, Communications and Intelligence (FAAD C3I) system, which permits external radar tracks and messages to be passed to the fire unit to alert and cue the gunner. Using the newly developed Slew-to-Cue subsystem, the commander or gunner can select a FAAD C3I reported target for engagement from a display, then, by a single push-button, initiate an automatic slew in azimuth.

JUNE 24, 2022 — Coughing, a runny nose and burning eyes and skin may sound like the signs of a worrisome illness. But for Soldiers in the 35th Combat Sustainment Support Battalion, the temporary symptoms were just from another day of training. More than 60 Soldiers traveled here Thursday to participate in gas chamber training […]