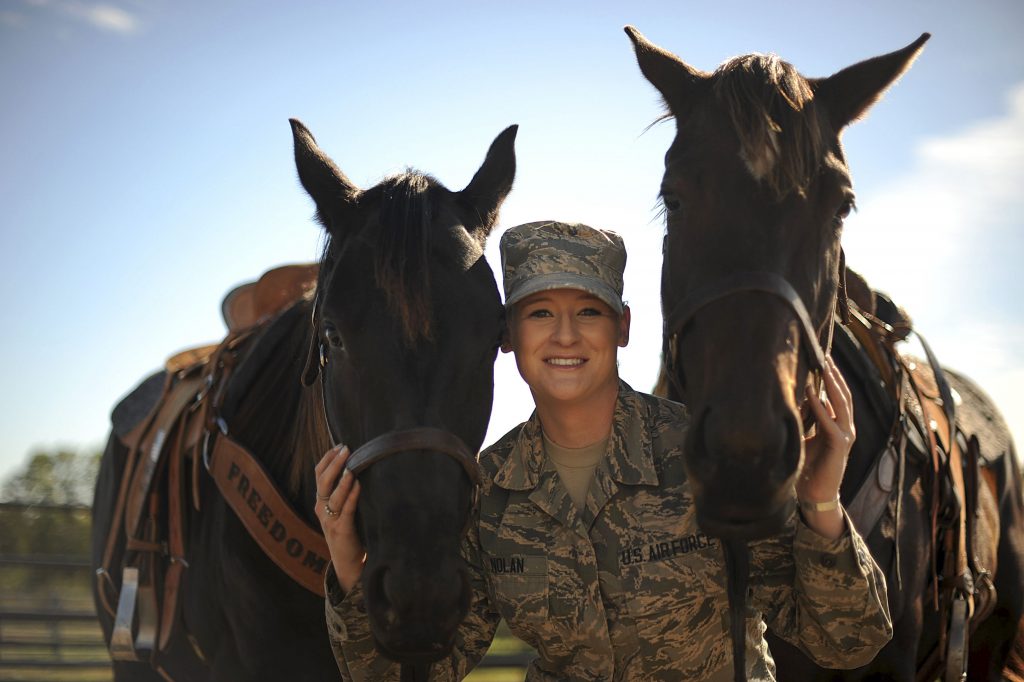 OCTOBER 19, 2018, Fort Carson, CO – Physical recovery for a Soldier dealing with wounds isn’t the only thing they need to worry about. The other half of their recovery equation is mental. Oh sure there is a lot of therapy available but one that is charging ahead more and more lately is equine therapy.

Earlier this month, Fort Carson Warrior Transition Battalion Soldiers participated in an Equine Therapy event at the United States Air Force Academy Stables in Colorado Springs, Colorado. Spc. Drew Joyner knows firsthand just how much this therapy works. While on his last deployment in March of 2017 at the Russian border in Latvia, a malfunction in his M1 Abrams tank caused carbon monoxide to pour inside.

He suffered physical injuries, resuscitated twice and now he suffers from a traumatic brain injury. He’s had to learn how to speak again, regain his memory, and heal physically. It’s a little overwhelming for a 21 year old from New Mexico who says he joined the Army because he wanted to help everyone by protecting their freedoms.

“I was depressed and sad but when I was there at the equine therapy event the horse Bella could tell I was down. She was not the horse I wanted but the other horses ran from me. She came over and put her head on my shoulder and it felt like she was hugging me….it lifted my depression right at that moment,” said Drew.

Although he has only been twice, Joyner says he has a special bond with Bella all because she picked him.

“We were told usually the horse will pick you…if it comes up to you, you bond then you have that trust- it’s awesome.- It’s all about trust,” he added.

Horses have an innate capacity of distrust. To earn a horse’s trust is nothing short of feeling like you’ve landed in the Kentucky Derby winners circle. This kind of therapy is helpful for physical and emotional healing according to an analysis by the Department of Veterans Affairs, particularly for Soldiers who are facing trust issues on their healing journey.

Joyner will transition out of the Army and hopes to continue helping people by working in the Sheriff’s Department in his hometown.

He credits the WTB for supporting his recovery. “I love it! They’ve helped me so much. My only job here is to get well,” said Joyner.

He hopes to be able to continue working with Bella when the Fort Carson WTB visits the ranch on Tuesdays, twice a month. He says learning about horses once you are injured takes on a whole new meaning whether it’s treating physical or mental issues.

“I’ve rode horses all my life growing up and this surprised me how it helped me,” said Drew.