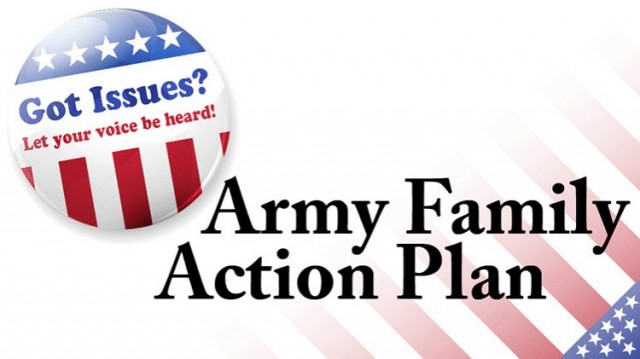 MARCH 30, 2021 – For more than 30 years, the Army Family Action Plan has given people a voice to make changes that provide a positive impact on the Army family.

The Army family is not just Soldiers and their families, it is also surviving family members, retirees, Department of the Army civilian, non-appropriated funds civilians and contractors, among others. In order to make a change for everyone, requests have to be made.

“Anything you think would help the Army provide better service,” Sallie Davis, AFAP manager here, said. “There’s probably some things out there that people would like to change, but they just don’t know about this.”

Since AFAP’s inception, 692 issues have been identified, 128 legislative changes have been made, 184 Army policy and regulatory changes and have made 208 improvements to programs and services.

Issues can include local or Army-wide issues. Davis explained that whenever they receive an issue request, it is taken to the garrison commander, who determines if it is an issue that can be resolved locally or should be sent to Installation Management Command. If the issue is bigger than IMCOM, it is sent to Army-level for resolution.

Within the last few months, Davis said someone requested barriers be put up in front of the Shoemaker Center, Bldg. 36000, due to safety concerns. The building has been a hub of activity since its rededication in January 2019. Traffic made it difficult and unsafe for people attempting to cross the street between the parking lot and building. The street now has barriers up, making motorists slow down and drive through the parking lot.

It only takes one person to make a change and Davis said nothing is too big or too small. If there is an issue a person would like resolved, it is helpful to include ways it could be improved.

To suggest an improvement, visit www.myarmyonesource.com, search AFAP in the search bar and click the “AFAP Issue Management System” button on the right side of the page.

“All in all, AFAP truly provides the ‘voice’ for families to elevate their concerns,” Davis said, “and remains the means for commander at all levels to seek solutions to the concerns of their communities.”