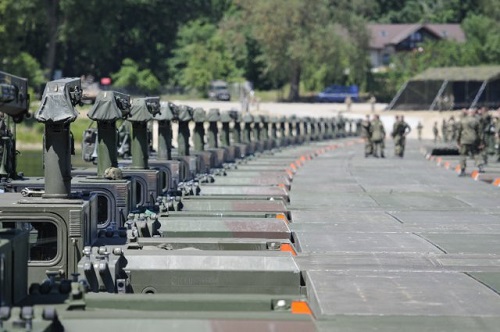 JUNE 9, 2016, CHELMNO, Poland – Soldiers, civilians and media excitedly watch from a nearby hilltop as 34 M3 Amphibious Rigs, both German and British, drive into the Vistula River near Chelmno, Poland, before converting into boats. In less than 40 minutes, the U.S., U.K., German and Polish troops set a new world record by building the longest amphibious vehicle bridge during Exercise Anakonda 2016, June 7-17.

The river quickly resembles a game of battleship as all 34 rigs descend into the water. “The vehicle is basically a big truck that has large aluminum pontoons attached to both sides that make it very buoyant,” explained British Capt. Simon Mayers assigned to the 75th Engineer Regiment. “Once it’s on the water, the pontoons open out and then the vehicles line up side by side together to form a ferry. When we have enough vehicles together, we can put ramps out and connect all the trucks together to make a bridge. ”

The mass formation of rigs stretching the length of the river is awe-inspiring but the real thrill comes as U.S. forces convoy across the makeshift bridge, demonstrating the sheer power of the rigs and the combined capability of four nations to dominate both land and water areas of operation, while acting as one powerful entity. Approximately 200 U.S. military vehicles successfully crossed the bridge, while the Polish army provided security.

Griffin has practiced several bridge crossings over the past year but none on this scale. “Working with the international forces has been fantastic,” Griffin said. “My platoon has personally worked with the German and Polish armies and they’ve been extremely hospitable and welcoming.”

According to Mayers, the rigs are normally capable of building 100 meters of bridge, which is enough for heavy trucks like Strykers, in as little as 30 minutes.

Exercise Anakonda 2016 is a Polish-led exercise that includes more than 25,000 participants from 24 nations and demonstrates cooperative efforts to increase combined training and security with partner and allied forces in Europe.