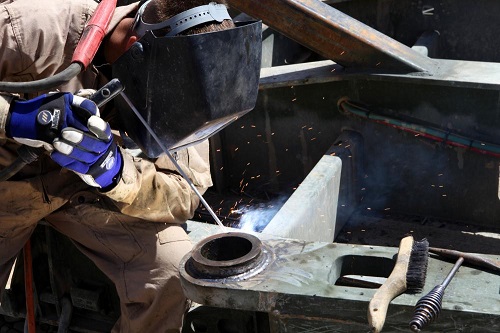 “The artillery shapes the battlefield,” said Zurick, a Marine with a field sunburn and uniform covered in dust.

Regardless of his current love for the artillery field and all his Marines within Battery D, 2nd Battalion, 14th Marine Regiment, becoming an artillery Marine was not always Zurick’s plan.

Shortly after Sept. 11, Zurick decided to join the Marine Corps as an officer. However, in midst his preparation for Officer Candidate School, he got injured.

“I was training with a friend of mine, when I pushed myself a little too far and injured my elbow,” he said. “I ended up tearing the cartilage out of my elbow. I could no longer do pull-ups, push-ups or any other sort of rigorous exercise.”

With his elbow injured, Zurick was no longer compatible for OCS. However, that did not stop him. He had his mind set in joining the Marine Corps.

After recovering from his injury, Zurick decided to enlist as a Reserve Marine.

He became a basic artillery cannoneer in 2005. Later, he deployed to Afghanistan in 2009, where he shot more than 50 artillery missions.

After his tour in Afghanistan, Zurick had a hard time finding a civilian job. However, due to his constant enthusiasm and devotion to duty, his former first sergeant found a civilian position for him within Joint Task Force – North.

Zurick’s attitude was to always volunteer for everything.

“I remember this one time, when the sergeant major had a soldier who was going to the Airborne School, as his reenlistment bonus, but in the last minute he decided not to go,” said Zurick. “ Within seconds I put my hand in the air and said ‘sergeant major, if you let me, this Marine will go today!’ and a week later I was on my way to the school.”

Zurick explained that if Marines have the motivation and dedication, the Marine Corps will always take care of them. They just need the confidence to put their hands in the air and keep their minds open for any opportunity that might show up.

“I am sort of a jack of all trades. I have done all sorts of work, such as roofing, landscaping, construction, plumbing, etc. I have never had a stable career, other than the Marine Corps,” he said. “To be a Marine and to be around other Marines along with the camaraderie that comes with it is simply fantastic.”

Zurick explains, at first it was tough deciding whether to sign and active duty or reserve contract. However, he has no regrets with choice.

He explains that being a Reserve Marine is like having the best of both worlds. The Marines Corps teaches discipline and core values that make Reserve Marines stand above the average citizen in the civilian world. In addition, their civilian jobs are extra skill sets that can contribute in making them better and more capable Marines.

“The great thing about being a Reserve Marine is that our civilian jobs help us bring an extra expertise to the fight,” he said.

He also compares the friendships and unity within each unit on active duty and Reserve components.

“Any typical active duty Marine, has to change duty stations every few years but I have been with the same battery in the last 12 years,” he explained. “I know all my Marines. I know them very well, I know what they are capable of and I also know their families.”

With a smile on his face, Zurick explains that his original plan was to enlist for a single contract. Yet, 13 years later, he jokingly declares he doesn’t plan on stop until the Marine Corps gets tired of him and kicks him out.