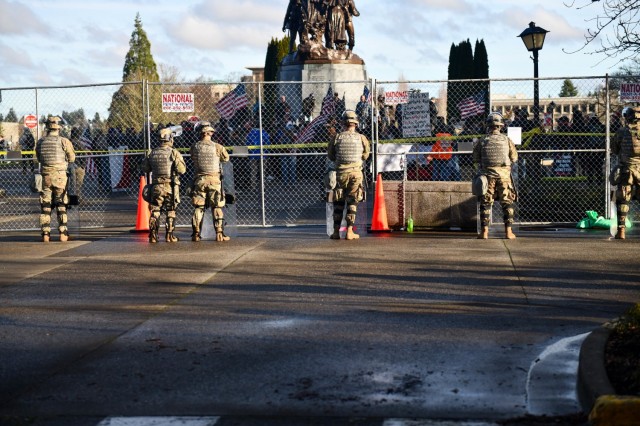 JANUARY 15, 2021 – Following a rally at the U.S. Capitol and the protests in Olympia, more than 600 Washington National Guard members have been activated to support officers with the Washington State Patrol to provide an additional level of protection at the state capitol.

Soldiers from the 96th Troop Command and 81st Stryker Brigade Combat Team in-processed on Saturday and deployed to Olympia Sunday. Guard members stood side by side with WSP troopers on Monday as legislative members and staffers arrived.

Following the activations in June to support civil unrest across the state the Washington National Guard trained nearly 1,500 Guardsmen on Military Assistance to Civil Disturbance operations.

“I received training in June following the civil unrest and in November as a refresher, so I felt that I was prepared to support if called,” said Spc. Rachel Dewaard, Intelligence Analyst with Headquarters and Headquarters Troop, 1st squadron, 303 Cavalry Regiment. “Just knowing what the equipment was and how to use the equipment was beneficial.”

Guardsmen will continue to support the Washington State Patrol until mission completion.