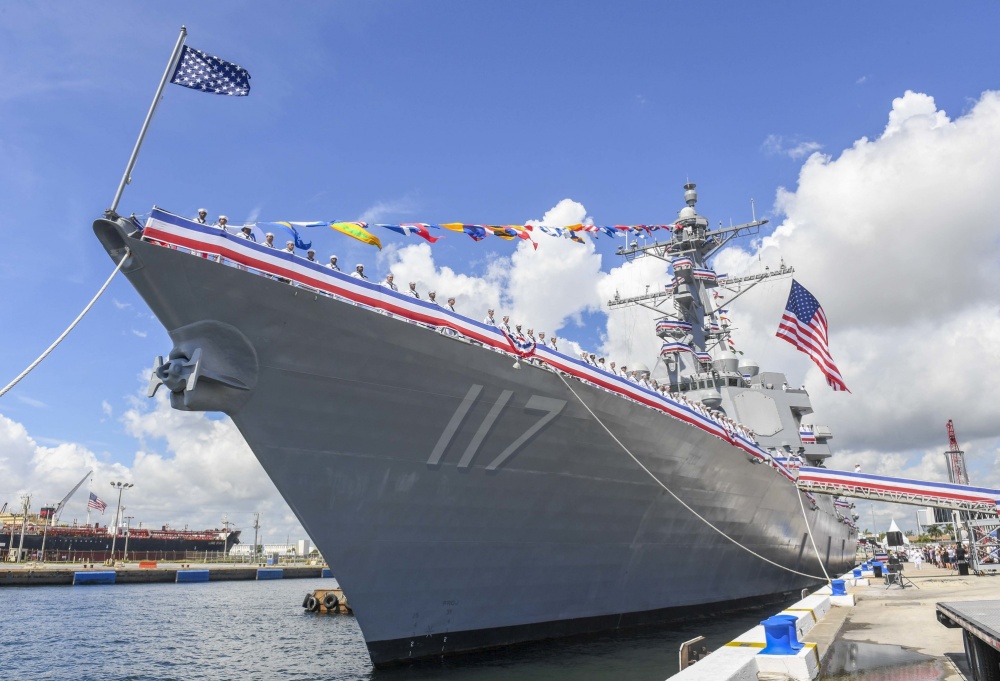 The ship’s namesake, Paul Ignatius, served honorably as Secretary of the Navy under President Lyndon Johnson from 1967 to 1969 and as a commissioned lieutenant during World War II aboard the Casablanca-class escort carrier USS Manila Bay (CVE 61).

“What could be greater than serving aboard a Unites States destroyer,” said Ignatius himself, speaking from a podium aboard the ship’s quarterdeck. “Destroyers have an honorable role in Navy history because of their many capabilities.”

It was Dr. Elisa Ignatius, granddaughter to the ship’s sponsor, the late Nancy Ignatius, who ordered the crew to bring the ship to life. Sailors rushed from shore, carrying aboard their motto “ALWAYS READY, FIGHT ON,” running two-at-a time to populate the ship. Medals jangled from their dress whites as Paul Ignatius Sailors manned all rail space and deck stations available under a sun-lit, billowing Ensign.

“Thank you all for your mental toughness and unwavering dedication to get our ship through every milestone of performing at sea with excellence,” said Cmdr. Robby D. Trotter, commanding officer of Paul Ignatius, to his crew. “I’m extremely proud of each and every one of you.”

Secretary of the Navy Richard V. Spencer was the ceremony’s principal speaker.

“The ship in her magnificence alone provides peace through presence and will keep the maritime commons open, which is the artery of free trade and commerce for our allies, friends and ourselves,” said Spencer, the 76th Secretary of the Navy. “But please keep in mind that at a moment’s notice, this well-trained crew and this ship can be put into harm’s way as your forward-deployed force to deliver the fight tonight in order to keep our peace and prosperity. That is the mission of this crew. That is the mission of this ship. And that, ladies and gentlemen, is the mission of your United States Navy.”

About 310 officers and enlisted personnel make up the crew of Paul Ignatius, slated to be home ported in Mayport, Florida. Together they have tried, tested and demonstrated seaworthiness as a lethal, ready and well-trained crew prepared to forward-operate in any ocean of the world.

“It’s a rare and special opportunity for a Sailor to be a plank owner,” said Chief Machinist’s Mate Gilbert Laguerre, the leading chief petty officer of Paul Ignatius’ auxiliary division. “We learn first-hand from the builders how to manage our equipment as it’s installed and we take great pride in becoming subject-matter experts.”

The Arleigh Burke-class destroyer sails up to 30 knots at sea, carrying advanced RADAR and SONAR systems that allow the ship to engage targets in the air, on the sea and underwater. The decks host two MK 41 Vertical Launching Systems (VLS), one five-inch gun turret, a close-in weapons system (CIWS) and two MK 32 triple-barrel torpedo mounts.