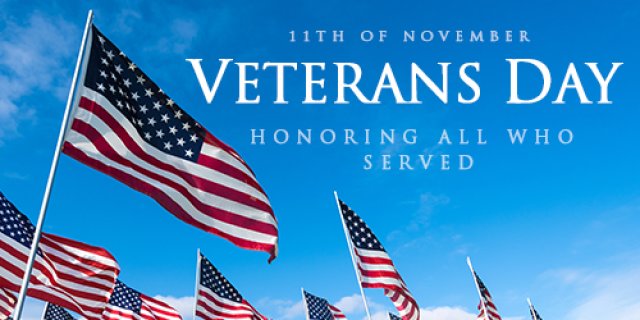 Every November, Americans pause their work, school and other activities to honor the service of our Nation’s veterans. Defense of this great Nation and our freedoms is a calling that requires perseverance and sacrifice like no other, and it is only fitting we take this day to honor our men and women in uniform, both past and present. We are proud to serve alongside you.

November 11th is commemorated each year as Veterans Day, a celebration of the patriotism, service and sacrifice of all those who serve or have served in the U.S. military.

The 2018 presidential proclamation designates the entire month of November as National Veterans and Military Families Month, celebrating military families whose selfless service and sacrifice make the military the finest in the world.

In 1918, on the 11th hour of the 11th day, of the 11th month, the battlefield of Europe fell silent after more than four years of fighting. In 1938, Congress declared Armistice Day a holiday, and, in 1954, the name changed to Veterans Day to honor all U.S. Veterans. This year, Veterans Day falls on the 100th anniversary of the signing of the armistice that ended World War I.

The Army honors the brave men and women from all walks of life who have stepped forward to defend the nation throughout its history. The ongoing World War I centennial commemoration is raising awareness of the legacy of the Army American Expeditionary Forces and their contributions to victory in “the Great War.”

The Army believes that every Soldier is a Soldier for Life. The Army’s Soldier for Life Program links transitioning Soldiers to employment and education opportunities and encourages veterans to remain connected to the Army.

The Army is committed to hiring veterans and 50 percent of Department of the Army Civilians are veterans.

The Army will continue collaborative efforts with the Department of Defense, sister services, other federal agencies, and industry partners to ensure veterans are connected with resources and support.

The U.S. has been at war for the last 17 years, and now has the largest population of young veterans since the Vietnam War. The Army has an obligation to these men and women who answered their nation’s call. Future Soldiers consider how veterans are taken care of as they consider serving themselves. Veterans help connect the public with the Army and inspire the next generation to serve.

When Soldiers return to their communities after military service, they bring with them attributes gained through Army service that make them great leaders, professionals and team members in any organization.

As we begin the countdown to the long weekend, it will be especially important for first-line leaders to engage their Soldiers on off-duty risk management. Simply asking, “What are your plans?” gives leaders a prime opportunity to get to know their Soldiers and what their individual risk factors might be. With more than half of all fatal, off-duty private motor vehicle mishaps occurring between Friday afternoon and Monday morning, and with nearly half involving speed, fatigue, alcohol or failure to wear seat belts, it is imperative that we incorporate informal counseling sessions in our overall safety programs. These conversations may not be easy or outside our comfort zone, but they are well worth the effort. We can save lives and prevent senseless loss by showing our Soldiers we care about and appreciate them.

Thank you for what you do every day for our Army. We wish you all a safe and happy Veterans Day.