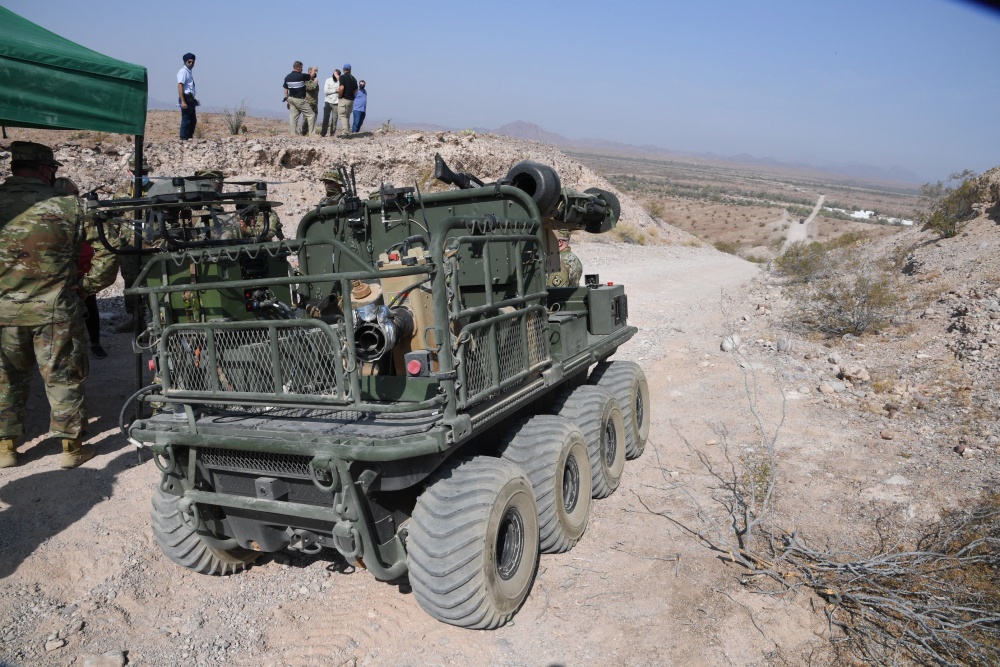 NOVEMBER 27, 2020 – During Project Convergence 20, the Army Futures Command’s capstone exercise of an ambitious project of learning, multiple examples of the most cutting-edge military technology were put through their paces on Yuma Proving Ground’s (YPG) vast ranges.

One of the most rugged was the Multi-Utility Tactical Transport (MUTT), an 8 x 8 unmanned all-terrain vehicle that will follow a dismounted infantry Soldier carrying a wireless tether.

In addition to its usefulness for lugging heavy gear, or even wounded Soldiers, an armed variant is outfitted with a Javelin anti-tank missile, a .50 caliber machine gun, and a M4 rifle.

“We are testing integrating multiple payloads that will enable a Soldier to do their mission more effectively,” said Gerald Jung, mechanical engineer. “Dismounted Soldiers can only carry what’s on their back—now they have a ‘mule’ that can carry much heavier equipment, but that’s still small enough to not restrict their mobility in tight areas.”

Perhaps the most interesting payload being evaluated was a tethered unmanned aerial system that can ascend 200 feet above the MUTT and serve a variety of purposes, including use as an electronic signal repeater.

“It can be used for reconnaissance, surveillance, or assessments of battle damage,” said Carlos Molina, test officer.

The MUTT can also be outfitted with other payloads: a screening obscuring module that delivers a smoke screen, chemical and biological agent detectors, and an ultra-low light night vision camera that produces full color images.

“You can see and make distinction of objects a lot easier when you have full color,” said Jung.

The testing at YPG across six weeks of Project Convergence’s capstone exercise subjected all of the systems to the most intense weather and terrain conditions the Sonoran Desert had to offer, and then some: Yuma experienced nine days of record-breaking heat across the time the demonstration was in progress. The MUTT was put through its paces across rugged, steep, unimproved desert roads and trails fully exposed to the elements as evaluators collected performance data.

“We had several days that were in excess of 115 degrees,” said Jung. “That’s without the solar loading—once you put the sun on it, the temperature of the vehicle can exceed 140 degrees. Some of our equipment reached 160 degrees.”

“This is a testament to how important it is to test out here,” said Molina. “A lot of these systems have never seen the temperatures we have here. When you add the temperature, the dust, the vibration, it is an extremely intense environment.”

Each MUTT is expected to be able to carry 1,000 pounds, operate for 60 miles in 72 hours, and run silently in the field to avoid detection by an adversary, all while being able to recharge Soldiers’ peripheral electronic gear like radios and night vision goggles with onboard power. YPG’s natural environment testing ensures this vital piece of equipment will work as expected wherever in the world it is called upon to serve.

“The YPG personnel have been phenomenal,” said Jung. “Whatever we needed, they were able to surge and provide it.”