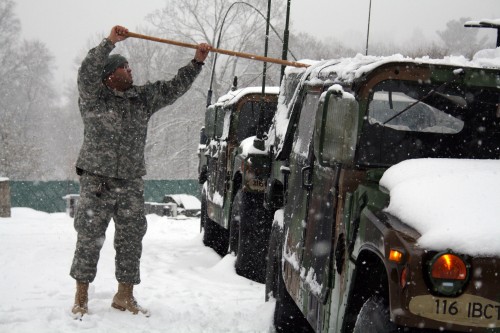 “I think our Soldiers are doing a fantastic job across the commonwealth in helping our state and local first responder partners get through the heavy snow to help their fellow Virginians,” said Maj. Gen. Timothy P. Williams, the adjutant general of Virginia.

“Working so closely with the Virginia State Police and local government emergency response officials under the guidance of the Virginia Department of Emergency Management has proven to be very effective. We also have a great team of Soldiers, Airmen and Virginia Defense Force members providing the necessary mission command, administrative and logistical support to make sure we have the right capability, in the right place, at the right time to get the job done. We also owe a special thank you to our families and employers for their critical support.”

Some of the significant activities accomplished by Soldiers of the 116th Infantry Brigade Combat Team:

– Virginia National Guard Soldiers working in support of Waynesboro Fire and Rescue responded along with an ambulance to an emergency call on Afton Mountain Jan. 24. The resident was located about one mile from the main cleared road, but the ambulance and rescue teams were not able to reach the house. The Guard Humvee with one EMT was able to move through the unplowed road and clear a path for a follow on vehicle to pick up the resident for movement to an air evacuation site.

– Virginia National Guard Soldiers working in support of the Greene County Rescue Squad responded along with an ambulance to an emergency call near Stanardsville Jan. 23. The ambulance was not able to make it to the residence through the heavy snow, so the EMTs moved to the Humvee to make it the residence where a man was suffering from chest pains. The Soldiers helped move the patient to the Humvee, then transferred him into the ambulance for evacuation. During transport, the patient’s heart stopped and a Soldier assisted with CPR. The patient was revived and successfully air lifted for further medical support.

– Virginia National Guard Soldiers working in support of local civil authorities in Winchester were dispatched Jan. 23, to assist an ambulance stuck in the snow while responding to a high-priority emergency call. Using two medium tactical trucks, the Soldiers drove in front of the ambulance to clear a path. Once at the residence, the EMTs were able to provide care, move the patient to the ambulance and then the Guard vehicles lead the ambulance to the cleared road.

– Virginia National Guard Soldiers working in support of Augusta County Fire Station #6 responded to a vehicle crash Jan. 22, where one of the passengers sustained a severe head injury. One of the Soldiers assisted fire and rescue personnel with extracting the passenger from the vehicle and moving them into the ambulance for evacuation.

– Virginia National Guard Soldiers working in support of Page County helped clear a path for an ambulance to reach a dialysis patient in need of transport Jan. 23, near Stanley. The Guard was able to clear a path so the rescue squad was able to transport the patient for required treatment.

The Staunton-based 116th Infantry Brigade Combat Team is providing mission command for the response operations in the field and is working more than 30 mission requests from the Virginia Department of Emergency Management to provide support to multiple localities as well as the Virginia State Police. Soldiers are deployed along the I-81 corridor between Lexington and Winchester, along the Route 29 corridor from Warrenton to Danville, as well as in the areas near Northern Virginia, Richmond, Fredericksburg and Gate City.

More than 400 Soldiers from units of the 116th IBCT as well as from the Virginia Beach-based 329th Regional Support Group and Bowling Green-based 91st Troop Command are on duty providing support.

The Virginia National Guard also has more than 100 Soldiers, Airmen and members of the Virginia Defense Force on duty in Richmond, Sandston and Fort Pickett where they are providing mission command, administrative and logistical support for the overall mission.

Gov. Terry McAuliffe authorized up to 500 personnel for state active duty in his initial emergency declaration, and then he increased that to 700. The Guard could bring additional personnel on duty if needed.

The Delaware National Guard activated nearly 300 Soldiers and Airmen to support the citizens of Delaware through Winter Storm Jonas.

The Guard leaned forward before the storm, prepositioning operators and tactical vehicles such as Humvees, 5-ton trucks, and wreckers to each county’s Emergency Operations Center (EOC). From each EOC, troops and vehicles were dispatched to local fire houses and state and local police departments. Getting out ahead of the storm allowed us the ability to provide immediate support throughout the storm.

< Officially, troops supported nearly 100 missions and 165 individual citizens. Missions included transporting medical professionals and first responders to and from work shifts and moving Delawareans to safety from flooding or effects of the snowstorm. Because of flooding in Sussex County, the Guard helped evacuate approximately 40 residents from the Oak Orchard/Long Neck area to area shelters or homes of friends. In New Castle County, due to the snowfall, we assisted another 40 Delawareans in getting to the hospital for emergency medical care or those stranded on the road. Included in these missions were efforts to recover an ambulance and a fire truck. We also conducted an aerial assessment of the flood damage in Sussex County for Gov. Jack Markell and other state officials. "Even though the Delaware National Guard has troops deployed around the world, we were able to provide the necessary support to our great state," said Maj. Gen. Frank Vavala, adjutant general, Delaware National Guard. In addition to helping 165 Delawareans on official missions, Soldiers and Airmen "unofficially" assisted countless stranded motorists and moved abandoned vehicles for the Department of Transportation workers to plow roads and first responders to complete their missions. Guard members were activated in other states as well. On Monday, their numbers were: D.C. – About 100 Ky. – More than 75 Md. – More than 500 N.J. – More than 120 Pa. – Over 300 W. Va. – Over 120