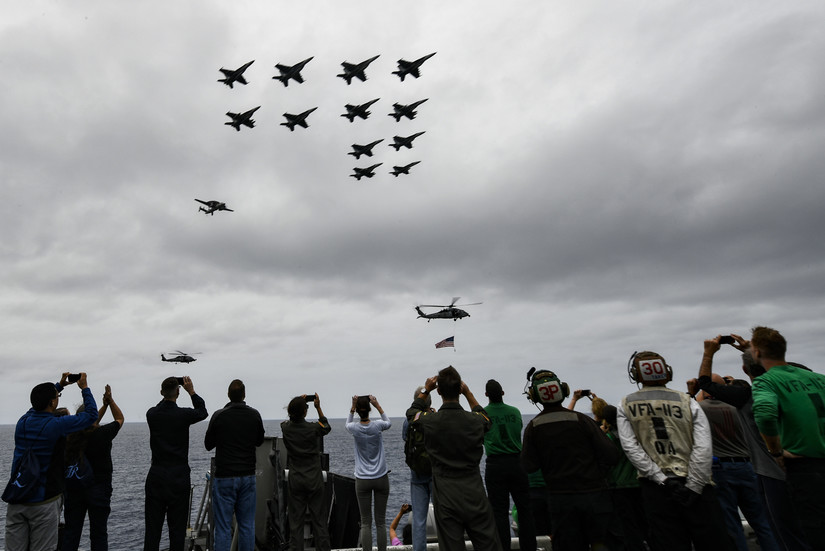 MAY 8, 2018, Pacific Ocean – Sailors, Marines and their guests marked the importance of naval aviation here May 3, remembering more than 107 years of innovation and achievement.

The ship is on its way to its home port at Naval Air Station North Island, California, after a seven-month deployment. More than 600 family members and friends embarked aboard the Theodore Roosevelt for a “Tiger Cruise” during a port call to Pearl Harbor, Hawaii, April 27-May 1.

Navy Capt. Carlos Sardiello, the commander of the USS Theodore Roosevelt, and Navy Capt. Gus Ford, the commander of Carrier Air Wing 17, spoke of how naval aviation relates to navies, both past and present, during the celebration hosted by the ship’s Naval Heritage Committee in the hangar bay.

“Aircraft carriers have come a long way,” Sardiello said. “The USS Pennsylvania started with a wooden deck with sandbags for arresting gear. Here we are a little over a century later with a nuclear-powered aircraft carrier.”

The captain emphasized the necessity of today’s aircraft and aircraft carriers in operations around the world.

“The importance of the nuclear-powered aircraft carrier to our nation’s defense lies in the fact that it is the only platform that can deliver air power from the sea in a sustainable fashion,” he said.

Family Support
It’s important for the Navy that embarked families and guests of the sailors and Marines understand life aboard an aircraft carrier, Ford said.

“It’s really hard to understand what it’s like to be in the Navy unless you come out here and experience it for yourself,” he said. “When the family members and friends go home they will talk about this experience, and what we have accomplished on this deployment will add to the legacy of the Navy.”

CVW-17 hosted an airpower demonstration for the ship’s guests, which displayed skills such as low-altitude passes and turns, high-speed fly-bys, combat maneuvers, and the detonation of live ordnance. The demonstration ended with 15 aircraft flying in formation over the flight deck.

Sailors, Marines and their guests watched as F/A-18F and F/A-18E Super Hornets, EA-18G Growlers, F/A-18C Hornets, MH-60S and MH-60R Sea Hawks and an E-2C Hawkeye performed in the skies above the carrier.

“The same can be said about today’s Navy as the Navy back during the Vietnam War,” he said. “An immediate line of defense and the ability to be any place at any time is critical to accomplish any mission. This carrier, other naval vessels and the air wing all make that possible.”

Naval aviation has played an integral part in supporting America’s maritime strategy, from the wooden decks of the USS Pennsylvania to the unforgiving non-skid surface aboard the USS Theodore Roosevelt.

Theodore Roosevelt left its home port of San Diego, Oct. 6, 2017, for a regularly-scheduled deployment to the U.S. 7th and 5th Fleet areas of responsibility.