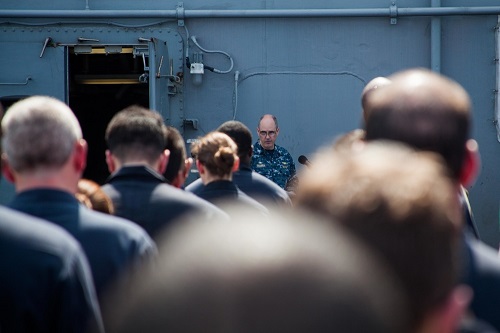 APRIL 17, 2017, GULF OF ADEN (NNS) – Amphibious assault ship USS Bataan (LHD 5) commemorated the 75th anniversary of the Battle of Bataan and ensuing Bataan Death March by hosting a number of events April 9 to 14, while deployed in the 5th Fleet Area of Operations in support of maritime security operations.

Bataan hosted multiple events during a five-day commemoration. Each event was coordinated to be physically demanding to signify and pay tribute to the suffering of those who served on Bataan from January 7 to April 9, 1942.

Shortly after Pearl Harbor, on January 7th 1942, American and Filipino Army, Navy and Marine service members began a three and half month battle on the Bataan Peninsula, the main Philippine island of Luzon against the Japanese.

On April 9, 1942, after seeing no hope of continuing to fight Bataan surrendered to the Japanese. Approximately 75,000 Filipino and American troops on Bataan were forced to make an arduous five day, 65-mile march to Camp O’Donnell and other concentration camps. The prisoners made the trek in intense heat and were subjected to harsh treatment by Japanese guards. Thousands perished in what became known as the Bataan Death March.

The five-day commemoration kicked off with a demanding team workout, completing eight exercises at 75 repetitions, in recognition of the anniversary. After completing enough workouts, the team members would then have to learn a piece of Bataan history that was later recited to a team coach to complete the circuit.

Sailors and Marines then took to the flight deck or designated treadmills to walk or run a total of 200 miles. In no way did these exercises began to compare to the trials that those service members experienced but it gave today’s Sailors and Marines aboard Bataan a way to honor their comrades who made the horrific Bataan Death March.

The final event was a Damage Control (DC) Olympics that also took place in the ship’s hangar bay. Teams of four participated in donning firefighting ensembles, setting up shoring and pipe patching and fire team hose obstacles that are implemented during shipboard damage control.

“As Sailors, our history is a big deal and we have to make sure we know our heritage,” Harville said. “This [commemoration] is to teach and remind junior Sailors and Marines of those who have come before us and what they sacrificed – of what happened in the past and why ships are named after different people, events, or battles.”

The commemoration came to a close on April 14; with a 21-gun salute and readings in honor of the Bataan’s namesakes, Chief Master Sgt. Alcide “Bull” Benini, which the Bataan’s flight deck is dedicated as Bull Benini Field and the ship’s museum Sgt. Jose Calugas, in honor of the first Filipino to receive the Medal of Honor.

“Thomas Jefferson once said the tree of liberty must be refreshed from time to time with the blood of its patriots. What he meant was that our great nation occasionally calls on our Soldiers, Sailors, Airmen and Marines to stand prepared to make the ultimate sacrifice to help preserve and defend our way of life,”

The Bataan is the second ship to bear the name, the light carrier USS Bataan (CVL 29), was commissioned November 17, 1943. It was the first ship to be named in honor of a World War II battle. The ship would go on to serve during the latter part of WWII and the Korean Was earning 13 battle stars.