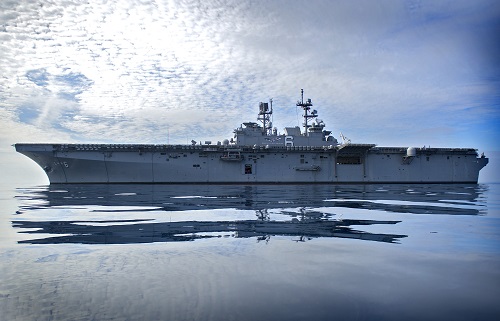 UNREP demonstrates the ship’s ability to sustain itself at sea and allows ships to continue its mission without the need to pull into port.

Guadalupe transferred fuel to America during the complex evolution that involved America’s air, deck and engineering departments working together to keep both ships perfectly aligned, receive the fuel, and have it properly tested and stored.

“This was my first time serving as conning officer,” said Ensign Jackson Fisher, deck department’s 1st division officer. “It was an awesome experience and I’m glad the evolution went [safely]. Everyone involved did an excellent job.”

America’s deck department prepared for several months to ensure the UNREP would be successful. Knowing they had to train their Sailors well in advance, they sent their most inexperienced personnel to ships on the San Diego waterfront to get hands-on training at sea. Additionally, the department simulated the evolution aboard America to ensure success.

“We trained up until the first day of the underway,” said Boatswain’s Mate 2nd Class Christopher Vincent, assigned to deck department’s 2nd Division. “At one time, I was in their shoes, and to see the look in their eyes is always fun for me. This is what we train for and that’s why I love teaching the new guys.”

At the conclusion of the UNREP, Capt. Michael. W. Baze, America’s commanding officer spoke over the 1MC, the ships announcement system, to congratulate the crew for a job well done.

“I wanted to pause at the end of the successful UNREP, which, by the way, was marvelous,” said Baze.

America is an aviation-centric amphibious assault ship that provides forward presence and power projection as an integral part of joint interagency and multinational maritime expeditionary forces. It will support Marine aviation requirements, from small-scale contingency operations of an expeditionary strike group, to forcible entry missions in major theaters of war. America is currently conducting maritime training operations off the coast of California.