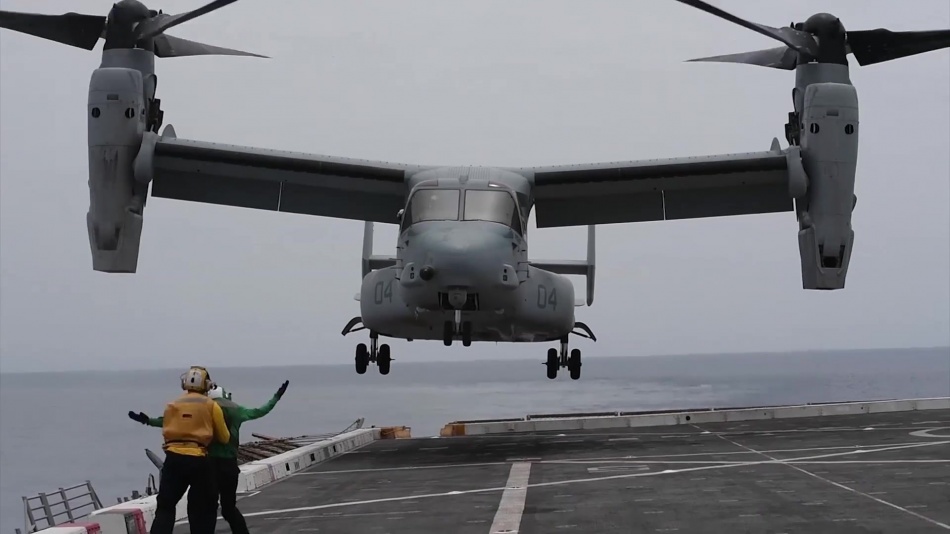 APRIL 16, 2021 – Military Sealift Command hospital ship USNS Mercy (T-AH 19) is currently conducting dynamic interface testing operations off the coast of Southern California. The operations are tests for compatibility usage of variants of the V-22 Osprey and MH-60 Seahawk with the ship’s new flight deck, and the first time a V-22 has landed on an MSC hospital ship.

The testing takes place following a seven-month maintenance period where the ship’s flight deck was expanded and reinforced to accommodate the size, weight and heat of larger aircraft, allowing the ship to receive patients and supplies through a variety of aviation platforms.

Over the course of several days, the ship will exercise with the V-22, practicing take-offs and landings from Mercy’s flight deck, followed by operations with the MH-60s. Increased flight operations will allow critical patients a quicker route to the ship for treatment, vice a slower boat ride from one of the ships tender boats.

“This is a historic event in the storied life of the USNS Mercy, and for MSC,” said Capt. Kendall Bridgewater, commander, Military Sealift Command Pacific. “Improving the capability of the ship to support newer aircraft platforms such as the MV-22, allows greater flexibility and enhances the embarked Medical Treatment team’s ability to continue providing the outstanding care they are known for. This investment in new capability is a great example of MSC’s continued support to the fleet and plays an important role in keeping the U.S. Navy competitive well into the future.”

The dynamic interface operations are one of several training, testing and inspection periods the Mercy will undergo in preparation for future missions, including the Pacific Partnership humanitarian mission.