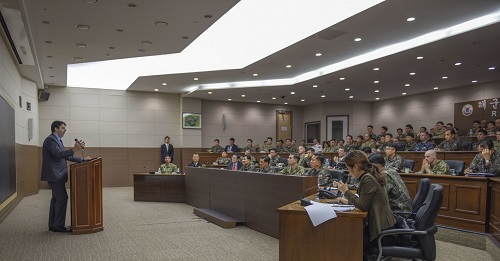 JANUARY 9, 2017, BUSAN, Republic of Korea (NNS) – U.S. Ambassador to the Republic of Korea, the Honorable Mark Lippert, reaffirmed the strength and resolve of the ROK and U.S. alliance during a visit to the ROK fleet base in Busan.

During the visit, Lippert, who was appointed October 2014, took time to thank more than 150 ROK and U.S. naval personnel for their combined service and support of regional security.

“I am often asked about the state of the alliance, and I am here to tell you that the alliance has never been as strong as it is today,” said Lippert. “You are working together every day, doing hard things with increasing difficulty and achieving great results.”

Before Lippert spoke, Vice Adm. Jung, Jin-seop, commander of ROK fleet, presented Lippert with an honorary commissioning to admiral in the ROK navy for his tireless devotion to naval development and his support of maritime security. This ceremony marked only the 19th time the ROK navy has bestowed the honor.

“He has been a strong friend to the ROK navy,” Jung said of Lippert. “He has served the U.S. and our alliance with great honor and pride.”

“We [ROK and U.S. navies] enjoyed a clear and distinct friendship with Ambassador Lippert and the entire embassy team,” said Cooper. “The accomplishments achieved during his tenure will have a lasting impact on not just the naval partnership, but the greater alliance for years to come.”

Lippert concluded his remarks by saying the strength of the partnership is the relationship forged between the ROK and U.S. people.

“Change is inevitable,” said Lippert, “but what is lasting are the bonds of our people and that bond is as strong as it has ever been. Together you have laid a great foundation, so use that to move forward and make this alliance even greater.”