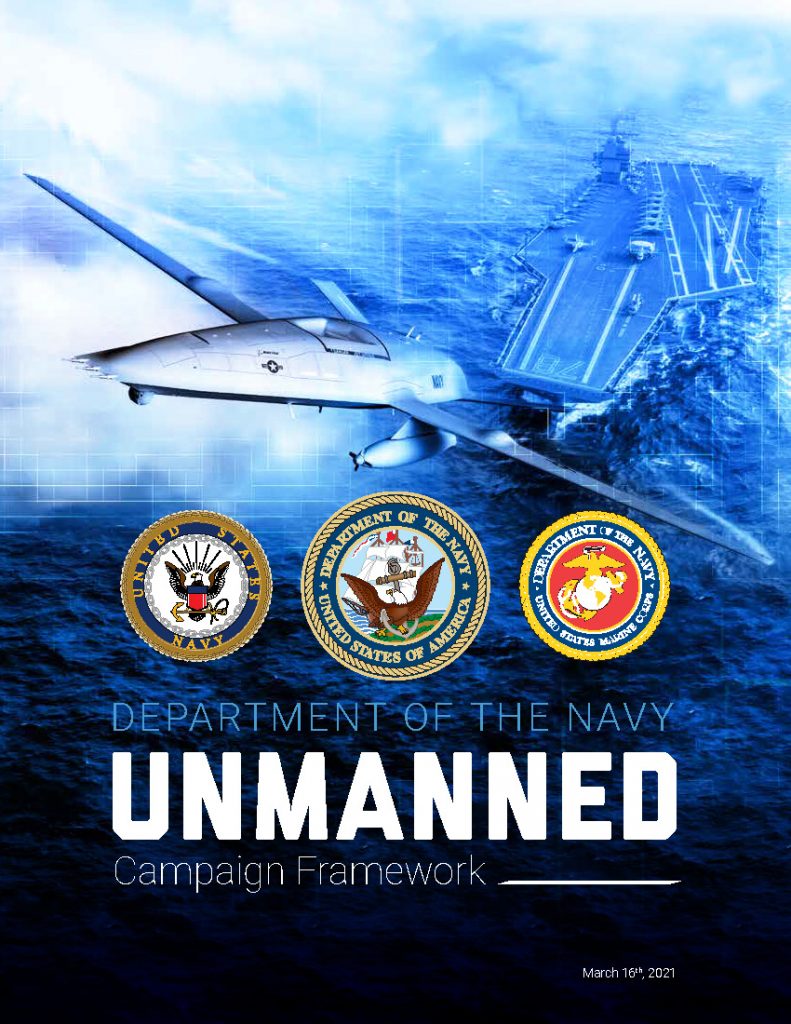 Through a capabilities-based approach we can build a future where unmanned systems are at the front lines of our competitive advantage.

The framework has five goals:

The framework provides a strategy for integrating these systems to provide lethal, survivable, and scalable effects supporting the future maritime mission. The Navy and Marine Corps are developing detailed technology maturation and acquisition roadmaps within a separate classified plan of action and milestones. The objective is to innovate quickly to provide solutions for complex problems of current and future conflicts.

The path forward requires a holistic approach to developing and deploying unmanned systems, ensuring that individual technologies can operate within a broader architecture of networked warfighting systems, supported by the right people, policies, operational concepts, and other enablers.

The campaign framework focuses on how the Navy and Marine Corps will reduce risk and identify performance requirements. Utilizing dedicated prototypes for each unmanned system and developing capability in this manner standardizes autonomy, command and control, payload interfaces, and networks.

“The Navy and Marine Corps unmanned campaign plan serves as a roadmap for how we will realize a future where unmanned systems serve as an integral part of the Navy’s warfighting team in support of distributed maritime operations,” said Vice Adm. Jim Kilby, Deputy Chief of Naval Operations for Warfighting Requirements and Capabilities. “The plan lays out how we will scale tested and proven systems as well as develop the core technologies required to successfully integrate unmanned systems into the fleet.”

The framework provides guidance for the Services to pursue an agile and aggressive approach to develop the core technologies required to successfully integrate unmanned systems into the Navy’s future force structure. The Services must invest in the networks, control systems, infrastructure, interfaces, artificial intelligence, and data required to support unmanned systems to succeed.

“The Navy and Marine Corps unmanned campaign plan will guide our naval research and development investments, and through the acquisition process, we will collaborate with our industry partners to design, build, field and sustain manned and unmanned teaming throughout the fleet,” said Frederick J. Stefany Acting Assistant Secretary of the Navy for Research, Development and Acquisition. “It also sets the framework to enable the Department of the Navy to accelerate, deliver and scale valuable manned and unmanned capabilities.”

Today’s global security environment has seen a return to Great Power Competition. This shift has placed the Department of the Navy at an inflection point where a traditional force structure will not be enough in the face of new warfighting demands. Autonomous systems are not a replacement; they provide additional capacity and capability to our combatant force and allows commanders the ability to accept risk where they couldn’t before.

“A family of unmanned systems is critical to the employment of our force during Distributed Maritime Operations. The goal is for us to be able to persist inside the weapons engagement zone of any adversary, to create problems and challenges, to make that adversary change their behavior or course of action they intend to pursue. These systems will be prevalent in all mediums: surface, sub-surface, ground and air. Manned/Unmanned teaming increases our lethality while allowing us to accept less risk in certain situations. Coordinating our efforts as a naval force will expedite the concept development and material solutions for our Marines and Sailors,” said Lt. Gen Eric Smith, commanding general of Marine Corps Combat Development Command and deputy commandant for Combat Development and Integration.