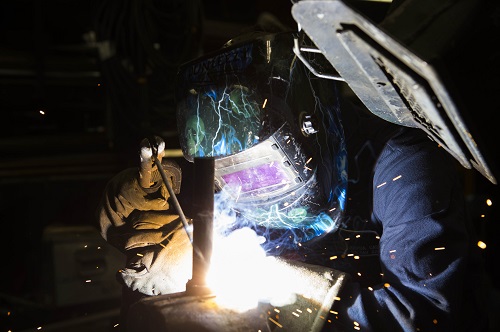 AUGUST 8, 2017, ARABIAN GULF (NNS) – For many Sailors and Marines, the military is great for on-the-job training. They work around the clock throughout the ship in different technical fields from welding to photography.

With the United Service Military Apprenticeship Program (USMAP), service members can attain tangible proof to show their next employer how much experience they gained working in their various fields aboard the ship.

USMAP offers apprenticeships for most rated Sailors. The program works with the Department of Labor (DOL) to provide nationally recognized apprenticeship programs which result in journeyman-level certificates of completion for members of the sea services. During their apprenticeship, service members document hours performing the duties associated with their job in the military.

The aircraft carrier USS Nimitz (CVN 68) has 813 Sailors aboard with completed apprenticeships and 720 who are currently working on their certifications.

“The DOL offers programs like this in the civilian sector as well, only you have to pay for it,” said Chief Navy Counselor Desiree Rivers, from Everett, Wash. “USMAP, however, does not cost a Sailor anything. It is completely free.”

The apprenticeships available coincide with the work service members are already doing on a day to day basis. Each certificate has a certain amount of hours required for completion and once the hours required are completed and the certificate is received, it gives Sailors a leg up in the Navy and against their civilian counterparts.

“Inside the Navy, it shows your chain of command that you can start something and finish it on your own time without supervision,” said Rivers. “When you separate from the military and you’re writing your resume for a new job, your resume is going to have that certification on it, so the benefits of the program are twofold.”

Vescio was advanced to first class petty officer within five years of being in the Navy, and said that it was because of everything he learned while also working on his apprenticeship.

“For people like myself, this program is huge,” said Vescio. “We get to get out of the Navy and jump right into a leadership position as a civilian instead of being the guy fetching the tools and having to learn how to use the machines.”

“I would have to work for years as a civilian to get my journeyman,” said Vescio. “My time in the military counts as progress with my career on the outside as well. Why would you not use this program to your advantage?”

By completing an apprenticeship program through USMAP, service members can save time and money by not having to complete them in the civilian sector.

Working 40 hours a week allows someone to complete about 2,000 hours in one year. For service members underway or on deployment they are able to log even more than that, meaning an apprenticeship is attainable in a shorter span of time.

With Nimitz being on deployment, the time spent while a Sailor waits to enroll is just time that they can’t claim for their apprenticeship. There is no downside to the program since it is time already spent working.

A Sailor can enroll in an apprenticeship by visiting https://www.usmap.netc.navy.mil and following the procedures on the website.

Nimitz is deployed in the U.S. 5th Fleet area of operations in support of Operation Inherent Resolve. While in this region, the ship and strike group are conducting maritime security operations to reassure allies and partners, preserve freedom of navigation, and maintain the free flow of commerce.