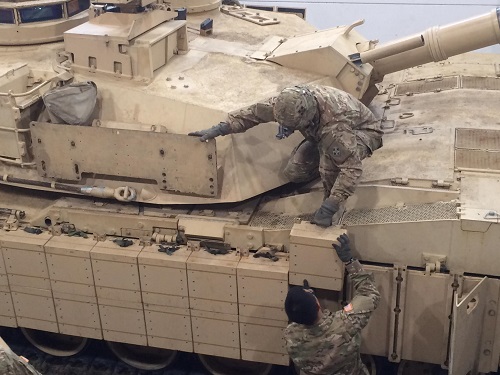 The crews, who are part of 3rd Armored Brigade Combat Team, 4th Infantry Division, which is serving as the initial ABCT rotational force in support of Atlantic Resolve, began installing the Abrams reactive armor tile (ARAT) system Feb. 28 to tank hulls and turrets.

“The ARAT adds extra layers of protection to the tank and the crew members,” said 1st Sgt. Ryan Dilling, senior noncommissioned officer of Company B (“Battle”), the first unit to install the tiles. “They are placed on both sides of the hull and turret. The reactive tiles prevent penetration of various weapon systems, such as RPG [rocket-propelled grenades].”

Beefing up U.S. armor also serves as a greater deterrent to acts of aggression against NATO nations as the 3/4 ABCT rolls out stronger tanks to conduct training with allies throughout central and eastern Europe, Dilling said.

“TACOM maintenance workers welded the brackets to hold the tiles on the tanks. After completion of the bracket welding, tank crews are then responsible for installing the reactive tiles,” Campbell said.

“Depending on what terrain you’re in, whether you’re in rural or urban terrain, the purpose of angled tiles is so that a blast will go down or upwards, which will allow the impact to deflect outward rather than at the tank crew,” Dilling said.

He said the angles of the tiles can be repositioned depending on the situation.

“If you have dismounts on the ground and they’re working in close proximity of the tank, you’d want to angle the tiles down so if there was a blast, it would go out and down to minimize the effect against Soldiers nearby,” he said.

“If you were in an urban environment and you had adversaries shooting from second or third stories or even on rooftops and the tiles were activated, the blast would push out and upwards toward the threat.”

“The ARAT looks like a good package,” he said. “In our current operating environment, should we have to engage a near-peer threat, we have to retain that mobility.”