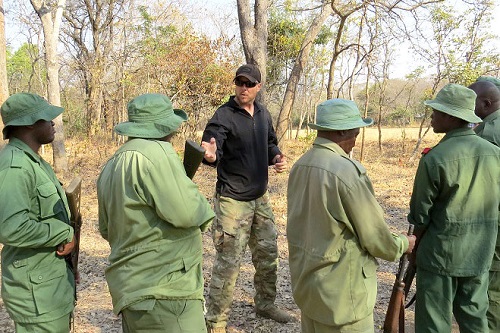 SEPTEMBER 12, 2016, TANZANIA, Africa – The African elephant can be as tall as 14 feet, weigh more than 15,000 pounds, and live up to 70 years. The already formidable animal’s sharp tusks can grow as long as 10 feet, which serve as additional insurance against any would-be predators.

It’s a sad irony then, that these tusks are also the reason some African Elephant populations are at risk. Recent surveys by the Tanzania government have shown that the country’s elephant population has declined dramatically due to poachers hunting the mammals for their ivory tusks.

What’s worse, the Center for Strategic and International Studies reports that ivory poached by violent extremist organizations is bartered for weapons and ammunition, compounding a conservation problem with an even larger security problem.

To combat the threat, Tanzania’s park and game reserve rangers have teamed with members of the U.S. Army’s 403rd Civil Affairs Battalion, a component of Combined Joint Task Force-Horn of Africa, and North Carolina National Guard, to conduct anti-poaching training from July to September 2016, at Rungwa Game Reserve, Tanzania.

“Tanzania has the second highest concentration of African elephants on the continent. Their population has been halved in the past ten years. It’s a crisis that not only affects east Africa — it affects the whole world,” said Capt. Michael Wilson, 403rd Civil Affairs Battalion team leader.

During the two months of training, Army Soldiers focused on building the Rungwa Park rangers’ knowledge of combat patrol and first aid and taught them movements that should increase their effectiveness at tracking, capturing and arresting illegal poachers in the Rungwa game reserve.

“The goal for this training mission was to train 20 to 40 rangers in field craft,” Wilson said. “As an instructor in part of the counter illicit trade training team, I conducted medical training, intelligence training, a full [spectrum] of training activities.”

The training is helping the rangers adapt to the poachers’ methods, according to Domina Mgelwa, a Rungwa Game Reserve game officer.

“We think [U.S. Soldiers] are more experienced in the field and they have more techniques which are important for us,” Mgelwa said. “Time changes and techniques change, so we need some new knowledge.”

The Army soldiers also taught the rangers small unit tactics and several battlefield skills that they can use to counter threats they encounter in the wild. Wilson described the rangers as enthusiastic students, in spite of the difficulty of the training.

“They came to class everyday ready to learn and — truth be told — we often took them outside of their comfort zone,” Wilson continued. They never complained, they did what we asked of them, and I think the benefit is that they will go away with skills and knowledge that will stay with them for their remaining time as rangers. ”

Moses Munya, the game reserve’s senior game warden, said that the training has given him the knowledge and the skills he needs to fight the poachers. It is knowledge that he plans to pass on to his colleagues when he returns to his work station.

“I appreciate the Americans’ practice. They gave us the directives, and I also like the military tactics,” Munya said. “They have trained us on how to crawl and different formations to reach the poachers’ camp or even capture the poachers.”

Wilson is also confident that the training will go a long way toward helping the rangers save an elephant population that has dwindled to fewer than 44,000.

“I believe now that these rangers will be more effective in the bush in hunting poachers, and I believe the statistics will eventually bear out that our actions here have had a positive impact,” he said.