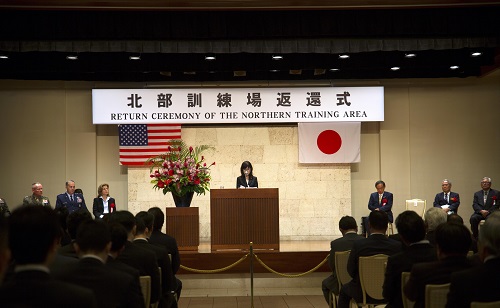 The ceremony honored the return of approximately 9,852 acres of the Northern Training Area, which represents a 17 percent reduction in U.S.-administered land on the main island of Okinawa, the single largest land return on Okinawa since 1972.

“This ceremony is historic,” said Maj. Gen. Joaquin F. Malavet, commanding general, Marine Corps Installations Pacific. “Marines remain proud and always faithful to the imperatives of our U.S.-Japan Alliance. We – together – have guaranteed the peace, stability and security across the broader Indo-Asia-Pacific. We must reflect on how much Japan and America give to one another … our shared history, our rich cultures, and the primacy of our most precious way of life.”

During the ceremony, representatives from the Government of Japan, Okinawa Prefectural Government, U.S. Forces Japan, and the U.S. State Department gave remarks regarding the significance of the land return to the Japan-U.S. alliance, as well as the preservation of Okinawa’s rich environmental features.

“We must acknowledge the commitment of our governments to return land … respecting the grace and goodness of the Okinawan people,” said Malavet. “Our shared friendship, shared strength and shared values have served to save lives, build peace, and guarantee prosperity throughout the region.”

The return follows an approximately nine-year-long effort that will prove vital to Okinawa’s environmental initiatives.

“The people of Okinawa are kind, generous and humble … you are strong and graceful,” said Malavet. “Like you, your land is strong and beautiful. We Marines remain deeply thankful to have the opportunity to share our lives and friendships with the Okinawan people … for the opportunity you have given us to share the goodness of this land, and to train and grow stronger with the Japan Self-Defense Forces here…so that our people, our children, and theirs may live more peaceful and prosperous lives.”

As the ceremony ended, the representatives gathered on stage to take photos.

According to Chief Cabinet Secretary Yoshihide Suga, the GOJ aims to use the land in a way that will make the best of the beautiful natural elements of the returned land. It will further contribute to the goodness of the land in Higashi and Kunigami, Okinawa.

The return of land through current and future projects, which are slated to meet a 23-percent reduction in U.S. Forces-controlled land, will ensure stability in the bilateral relationship between Japan and U.S. Forces by allowing for further consolidation. The initiatives are designed to ensure the forces can together remain a robust, stable, forward presence, which is fundamental to treaty commitments and ensuring a peaceful and prosperous region.