Using a tactical voice bridge, or TVB, radio, the combined Soldiers trained on how to transfer analog voice and data into digital voice and data. They then used the TVB to transmit and broadcast data to allied radio systems, creating a link between Dutch and U.S. radios.

The ability to transmit voice and data communications across radio systems and mission command platforms enables communications interoperability among allied nations. Training signaleers on the use of radio interoperability systems enlarges the overall common operational picture for combat units by expanding the reach of radio systems to both organic and multinational units.

“Working with the Dutch signalers, being able to learn about their radios and how they communicate overall, increases our ability to integrate and work together,” said U.S. Army Sgt. Derek McGarry, a paratrooper with Company C. “The tactical voice bridge breaks down battlefield communications barriers. I look forward to learning from the Dutch and working with them in the future.”

Together, signaleers, from the U.S. and Dutch armies, developed techniques, tactics, and procedures for the usage of radio interoperability solutions, which will set the stage for future multinational battlefield communications, and for increased levels of NATO communications interoperability.

The 173rd Airborne Brigade, based in Vicenza, Italy, is the U.S. Army Contingency Force in Europe, providing ready forces anywhere in the U.S. European, Africa and Central Commands areas of responsibility within 18 hours. 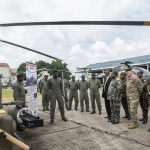