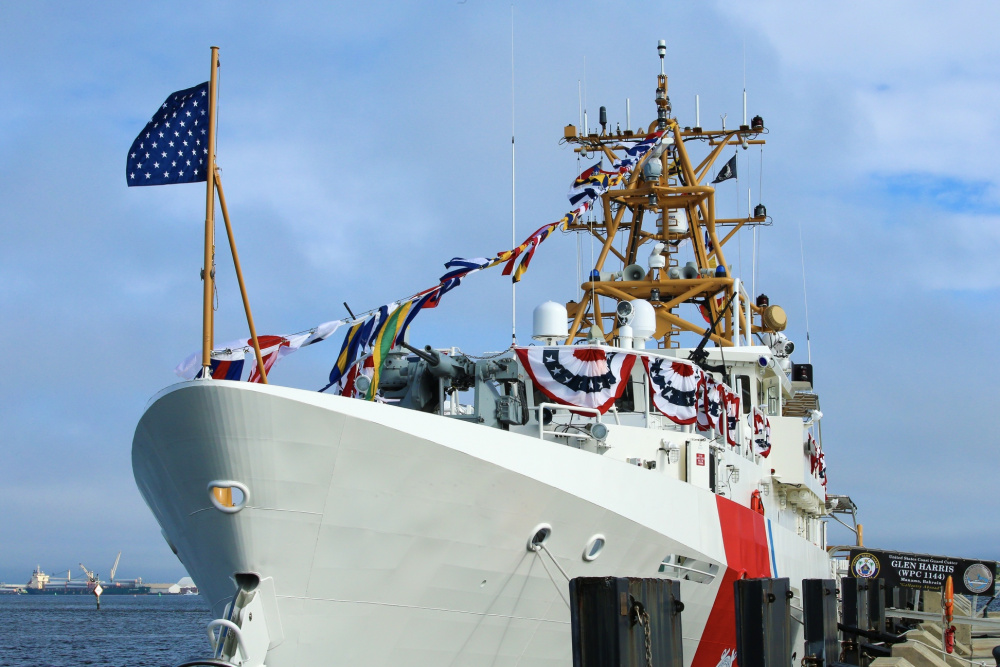 The Glen Harris will be homeported in Manama, Bahrain, and serve at U.S. Patrol Forces Southwest Asia. Adm. Linda Fagan, the vice commandant of the U.S. Coast Guard, presided over the ceremony.

“Coast Guard Cutter Glen Harris is one of six fast response cutters that will relieve the 110-foot patrol boats which have boldly stood the watch in the Fifth Fleet AOR since 2003,” said Fagan. “It is clear the Coast Guard is poised now more than ever to seamlessly integrate with the Navy and Marine Corps team to support the advantage at sea and the Tri-Service Maritime Strategy. We are poised to be a key part of that strategy.”

The cutter’s namesake is Chief Petty Officer Glen Livingston Harris, a native of North Carolina. He acted as a landing craft coxswain during the landing of Tulagi, which took place Aug. 7-9, 1942, during World War II. Along with three other U.S. Coast Guard coxswains, Harris landed the first U.S. Marines on Tulagi. Over the next three days of conflict, he made repeated trips under heavy enemy fire to deliver ammunition and other supplies to U.S. forces. In September of the same year, he landed against forces at Taivu Point, Guadalcanal Island, thereby materially contributing to the enemy’s eventual defeat. Harris was awarded the Silver Star Medal for gallantry by Adm. Chester Nimitz.

“The Coast Guard will build 64 fast response cutters, name each for an enlisted hero like Glen Harris, and each dedication uncovers a little-known story, and each story adds volumes to our understanding of our own Coast Guard history,” said Fagan.

“My grandfather was one of the most honorable men I have ever known. He was so proud to be an American and a member of the United States Coast Guard. He was our papi, and we absolutely adored him,” said Howley. “He was an extremely humble man and rarely spoke about his time in World War II. But I believe if he were here with us today, he would most certainly say that his actions in the Tulagi Islands, as well as his crewmates that were by his side during the mission, were not heroic at all, but simply a reflection of the Coast Guard’s long tradition of life-saving missions and of putting others before oneself.”

The Harris crew is already credited with saving lives. While in pre-commissioning status, the crew was first on scene and essential in the response, rescuing a member of the 175-foot lift boat capsizing eight miles south of Port Fourchon, Louisiana, on April 13. The U.S. Coast Guard and multiple good Samaritan vessels responded to the capsized vessel and searched for multiple missing people in the water.

The Sentinel-class is a key component of the Service’s offshore fleet capable of deploying independently to conduct missions, including port, waterways, coastal security, fishery patrols, search and rescue, and national defense. They are 154 feet in length, 25 feet in beam, and 353 long tons in displacement. They have a top speed of more than 28 knots, a range of 2,500 nautical miles, an endurance of up to 5 days, and can hold a crew of up to 24. These new cutters are replacing the aging Island-class 110-foot patrol boats in service since 1985.

The U.S. Coast Guard accepted the Glen Harris on April 22. They will transit to Bahrain later this year with their sister ship, the Emlen Tunnell (WPC 1145), delivered July 1 and due to be commissioned in Philadelphia before departure.

Ship commissioning is the act or ceremony of placing a ship in active service. Once a ship has been commissioned, its final step toward becoming an active unit of the agency it serves is to report to its homeport and officially load or accept any remaining equipment. 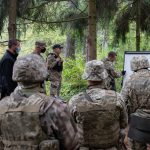