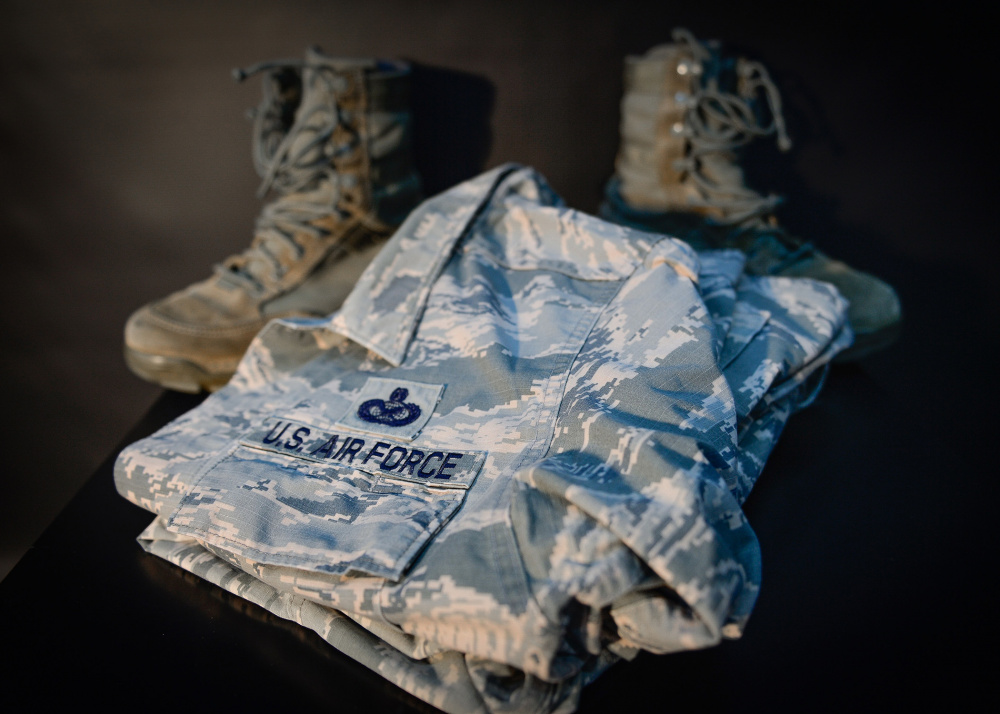 JANUARY 22, 2021 – U.S. Air Force Airmen will end the month of March this year, leaving behind a threadbare and faded slate-blue battle uniform with equally ragged conversations on its wear during the last decade: the ABU, or Airman Battle Uniform.

Not since leisure suit wearers were cool has an outfit been so disliked and oppositely loved.

Well, that’s exaggerating much for effect. But I recently asked Airmen at the training and education center in East Tennessee for their experiences with the ABU. One opponent compared its camouflage design to an over-patterned couch; another advocate hailed its unique ability to channel the wind down her sleeves, from one arm to the other while driving down the road – she will miss that. My inbox received these diverse responses.

Allow some more to that pile, and then we’ll put the ABU to mothballs.

During the ABU’s four-year phase-in period between 2007 to 2011, service members were very much in harm’s way in a global war on terrorism. There was a good intention to shape a 21st Century U.S. Air Force and join with the other components to move past antiquated woodland-pattern camouflage in the Battle Dress Uniform. We needed new looks to match bold actions to keep moving forward, but it also became a bit of a dance-off.

Like the unique digital designs that the Army and Navy phased in to catch up with the Marine Corps, the cut-and-stitch of our service-specific design was not without issues. “ABUs came in handy when I wanted to blend in with concrete,” one Airman emailed me. “Turned out, the ABU pattern blended into the mountains extremely well,” said another Airman about his experience training outside Bagram Airfield in Afghanistan.

Just out in my hometown USA, there were no doubts that the sage-green boots weren’t hip with a pair of blue jeans and a T-shirt. It looked about as stylish as a fat collar and polyester bell-bottoms. “But if they were the only shoes you took TDY, you just owned it, or you stayed in the dorm,” one Airman told me.

The modernized, grey tiger stripes initially looked slightly off from the Airman’s ABU next to us. We saw different uniform tints, from closet hanger to closet hanger, to formations in the hangar. “It sure kept us all guessing the ABU’s true color early on,” one Airman told me.

But unquestionably, the changes that most Airmen dug and still enjoy are the wash and wear, no iron mandate. Our cans of black shoe polish, but for the dress uniforms, would have dried up long ago too. Those were some significant differences from the BDU that saved us time and filthy fingernails.

In the dining facility, the ABU kept the advantages of ample apron pockets needed for a handful of cookies and a banana to stash on your way out. But you’d lose time searching the coat rack for your hat that someone mistook for theirs. That’s no issue with the new uniform’s hat nametape.

The wrinkle-free Operational Camouflage Pattern, or OCP, uniform and no-polish coyote-brown boots kept some of the ABU’s fab benefits. The sensation continues with the addition of patches and Velcro; with a rip and a slap, we can change a rank, last name, or unit with ease. Still, one master sergeant emailed me that she hopes for the morale-day T-shirts with bold colors, but that era seems dead.

Several coworkers told me how they would miss the ABU’s large sleeve ranks. “We could wear our stripes with prominence,” said one. “I need to be right on top of someone to see what rank they are now,” said another. I agree with them and stack on the particular practice in personally sewing rank on sleeves, which I always did since the ‘80s. I’d use the moment to meditate on what the promotion meant and my responsibilities, as well as pay penance from the occasional needle stick.

But such traditions are not much fun or necessary. Change always has its loss and gain. History will show that the U.S. Air Force once had a unique utility uniform that, no matter our opinions of it, Airmen wore with absolute pride all over the world. I will truly miss that. Now Airmen share their cloth with the U.S. Army’s Soldiers and the U.S. Space Force’s Guardians, and that’s Dynomite.

“For the joint warfighter to be a part of the big team, the evolution of the U.S. Air Force uniform lends itself to an end,” a senior leader emailed me. “No matter what uniform we wear, it’s Airmen in their rigger, tenacity, and grit that will prevail.”

For those last holdouts: it’s time to fold it up. The ABU has gone the way of the BDU, and leisure suits.