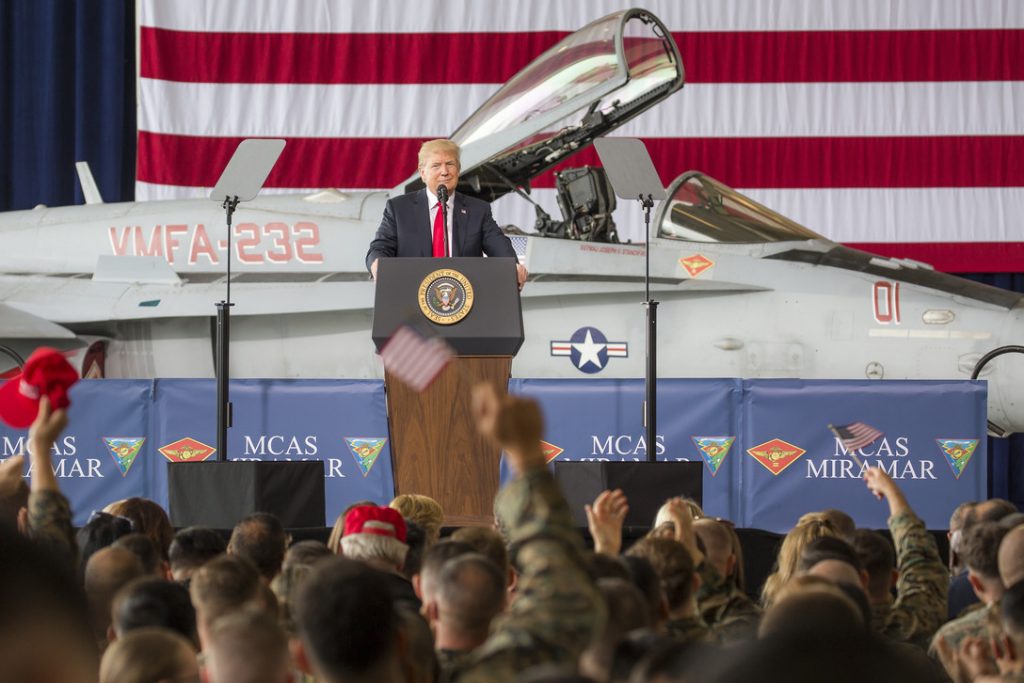 MARCH 14, 2018, Washington D.C. – President Donald J. Trump today thanked the men and women of the military for their service and highlighted his commitment to increased defense spending and national security in a speech at Marine Corps Air Station Miramar, California.

Service members have the love and support of the American people, Trump said at the start of his address. He thanked military families for backing their loved ones, saying none of what the military does would be possible without that support.

Inspiration to Young Americans
Speaking at an air hangar, the president commended the Marines in the audience for their bravery and commitment, saying they are an inspiration to countless young Americans who dream of serving in that military branch.

“Your devotion fills our allies and our families with confidence,” Trump said. “Your courage fills our enemies with dread.”

Marines, he said, are faithful to mission and country and have a legendary heritage — the first into battle and the first to fight. “Marines never give up, never give in, never retreat and never ever surrender,” the president said.

Trump noted that commanders in Afghanistan have been empowered with the authorities they need to win, “enabling the full might of the American military.” Meanwhile, he said, the coalition to defeat the Islamic State of Iraq and Syria has liberated nearly 100 percent of the territory previously held by the terrorists in Syria and Iraq.

“Your service has been extraordinary,” Trump said, applauding those in the audience who recently returned from deployment. “We won’t let up until ISIS is completely destroyed.”

Commitment to Peace through Strength
The commander in chief underscored his commitment to modernization and investments in military people and equipment and in national security. “The Trump administration is committed to a policy of peace through strength,” he said, pointing out that the recent budget deal put an end to sequestration spending cuts.

“We’re now undertaking the largest military buildup since Ronald Reagan and one of the largest buildups we’ve ever had in the history of our nation,” he said, noting that last year he requested and received an additional $21 billion to address urgent readiness shortfalls.

“The two-year budget agreement I just reached with Congress will provide $700 billion in defense funding this year, the largest ever — larger by far than any country has ever spent,” he said.

Next year, defense funding will be $716 billion, he said.

Investments in the Military
Trump highlighted a number of areas of investment, including with new F-35 Lightning II joint strike fighters and CH-53K King Stallion helicopters. He discussed the modernization of U.S. nuclear capabilities, rebuilding of the nuclear infrastructure, investments in hyper sonic weapon systems, and the focus on space as a warfighting domain.

“We’re also investing in our greatest weapon of all, our most powerful weapon, our most beautiful weapon, our most brilliant weapon: you,” he said, pointing out to the service members in the hangar. He added that he seeks to give them their largest pay raise in more than a decade next year, a comment met by applause and cheers. 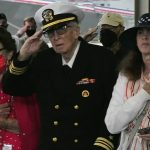