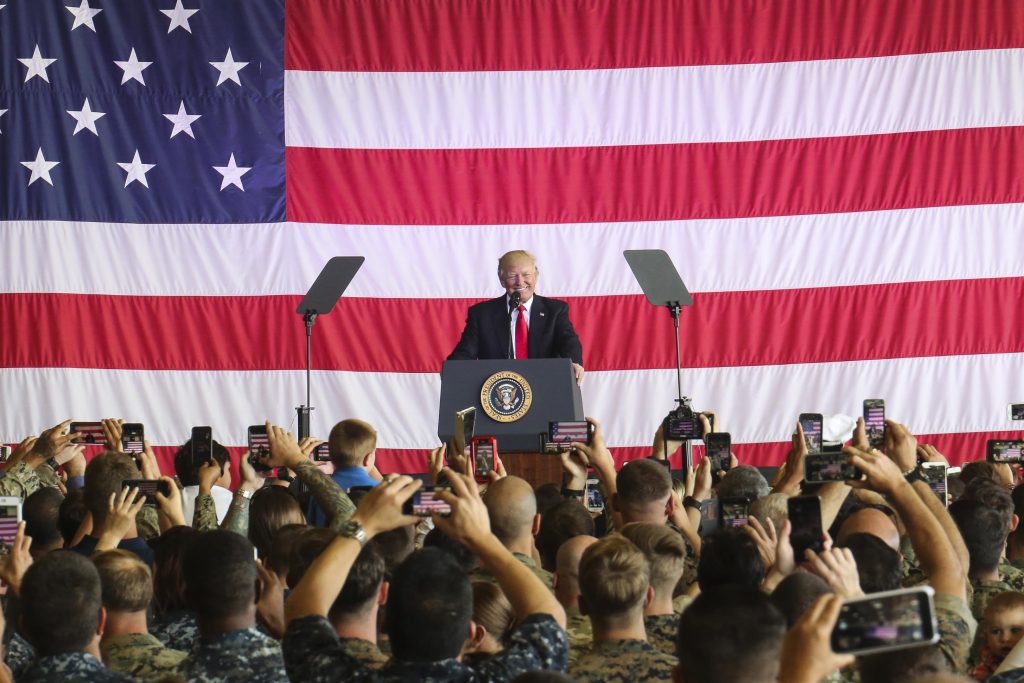 JANUARY 18, 2019 – When it comes to defending America against the threat of a missile attack from any nation, President Donald J. Trump said today that “the goal is simple. It is to ensure we can detect and destroy any missile launched against the United States, anytime, anywhere and any place.”

Trump gave his remarks at the Pentagon at the announcement of the release of the 2019 Missile Defense Review.

Missile defense is so important in a time of rapidly evolving threats from around the world, he said. Adversaries are acquiring bigger and stronger arsenals. They’re increasing their lethal strike capabilities and they’re focused on building long-range missiles that can reach targets within the United States.

“As president, my first duty is the defense of our country,” he said.

Trump then outlined six missile defense priorities, which he said will be reflected in upcoming Defense Department budgets:

First, 20 new ground-based interceptors are being constructed, which will bring the total to 64, he said.

Currently 40 GBIs are at Fort Greely, Alaska, and four are at Vandenberg Air Force Base, California.

Second, Trump said DOD will focus on developing new missile defense technologies, such as more powerful sensors and radars that will be deployed to detect missile launches and track them so countermeasures can be taken.

Third, he said, that besides protecting “all American cities” from ballistic missile attacks, DOD will develop an effective missile defense against emerging advanced cruise and hypersonic weapons.

Fourth, Trump said, a big part of future DOD budgets will reflect the importance of the space domain. “It will be a big part of both defense and offense. The system will terminate any missile launches from any type or place.”

And finally, Trump said the U.S. will work with allies on missile defense protection, such as prioritizing the sale of American missile defense and technologies so they can be defended as well. The U.S. will also share with them early warning and tracking to detect missile launches.

Other Missile Defense Information
During a news briefing following Trump’s remarks, Air Force Lt. Gen. Samuel A. Greaves, the director of the Missile Defense Agency, said a determination will be made where the new GBIs mentioned by the president will be placed, with more than one site now under consideration.

Greaves added to the president’s remarks about cutting bureaucratic obstacles. He said DOD will pursue a disciplined acquisition process with timelines, disciplined milestones and decisions based on rigorous experimentation and analysis of the effectiveness of new missile defense technologies.

Michael D. Griffin, under secretary of defense for research and engineering, noted that space-based sensors will enable “global awareness” of missile launches and targeting data and he added that “rapid progress” will be made in this endeavor.

He also mentioned that more weapon systems are being developed for the F-35 Lightning II that will enable the aircraft to take out enemy missiles. The F-35 can already take out certain types of missiles, but not more advanced weapons such as hypersonics.

Also, the MDR report mentions that DOD is pursuing the development of small but powerful lasers that can be mounted on unmanned aerial vehicles that could potentially destroy enemy missiles.

According to the MDR, one impetus for the new missile defense strategy is that hypersonic glide vehicles are being developed by Russia and China that can fly at Mach 5 plus — meaning in excess of 5 times the speed of sound. North Korea has successfully tested its road-mobile Hwasong-13 and Hwasong-14 intercontinental ballistic missile, which could potentially hit portions of the United States. Also, Iran’s progress in its space program could shorten its path to an ICBM.

In particular, hypersonic weapons have been a concern because they can fly low, fast and can quickly change course. Therefore that makes them hard to target, according to the MDR.

The goal, perhaps in a decade, is to develop space-based sensors that can detect the launch of a ballistic or hypersonic weapon, the review explains. Ideally, the aim is to detect the missile at the initial boost stage and then use missiles or lasers to shoot these down or during the mid-course phase and hopefully, at least by the terminal stage when it’s about to lock onto its target, it said.

The new missile defense initiative is not a strategy for a preemptive strike, according to the MDR. It is purely a defensive action “if deterrence fails and conflict with a rogue state or within a region ensues.”

Russia and China have their own versions of missile defense already, the review notes.