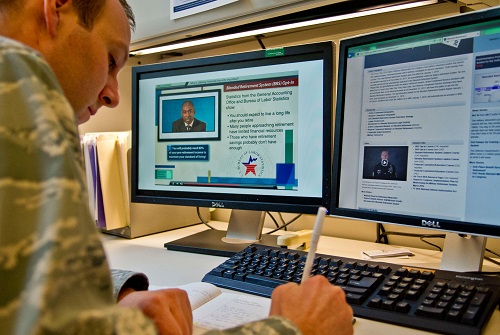 FEBRUARY 2, 2017, WASHINGTON – The Defense Department has launched mandatory training for eligible service members about their options under the blended retirement system nearly a year before that new system goes into effect on Jan. 1, 2018, Defense Department officials said.

“The new military retirement system is “one of the most significant changes to military pay and benefits that we’ve had over the past 70 years,” said Anthony Kurta, who is performing the duties of under secretary of defense for personnel and readiness.

It’s important that eligible service members know their options under the legacy and new systems and choose the retirement plan that works best for them and their families, Kurta told Pentagon reporters Wednesday. “We’ll now be able to offer to 85 percent of our force a portable government retirement savings while still maintaining a traditional pension for those that serve at least 20 years,” he said.

The new system is a key step in modernizing the military’s ability to recruit, retain and maintain the best talent for the future force, he said, noting the changes bring the military in line with similar private-sector retirement plans and provide more options for service members.

The changes to the military retirement system are authorized in the fiscal year 2016 National Defense Authorization Act, explained Andrew Corso, the assistant director of military compensation policy and project lead for the implementation of the new system.

The new system blends features from the existing system, including a traditional defined-benefit annuity, with new benefits including automatic and matching thrift savings plan (TSP) contributions, as well as an incentive payment at the mid-career point, Corso said, in an interview with DoD News.

The goal of the blended system, Corso said, is to provide benefits to a wider swath of members as compared to the current system.

Eligible service members have until the end of 2018 to make the switch.

Service members who join the military on or after Jan. 1, 2018, will be automatically enrolled in the new system and will be required to take mandated training about the blended retirement system within their first year of service.

Troops who do not meet the above criteria to opt in will remain covered under the legacy system and will not have the option to switch.

Service members are encouraged to go over their options carefully before making decisions on their retirement, said Kim Myers, an official with the Office of the Deputy Assistant Secretary of Defense for Force Education and Training.

BENEFITS FOR MAJORITY OF TROOPS

About 80 percent of service members leave the service before their 20-year mark, when they would be eligible for retirement benefits under the current system, Corso said.

The blended retirement system allows members to earn government retirement benefits early in their career, he said, noting members can take those benefits with them even if they don’t end up retiring from the military.

Under the blended retirement system, DOD will automatically contribute 1 percent of a service member’s basic pay to that individual’s TSP account after 60 days of service, with matching contributions up to 4 percent to begin at the start of three years through the completion of 26 years of service. For opt-in-eligible service members, both the automatic and matching contributions would start the first pay period following election into the blended retirement system.

Further, the blended system offers a cash payment to service members once they reach eight to 12 years of service and opt to stay in for a minimum of three more years.

The third part of the blended retirement system is a defined benefit or a monthly annuity, similar to what service members get today. The new system, however, uses a 2-percent, rather than 2.5-percent multiplier in calculating military retired pay for the defined benefit.