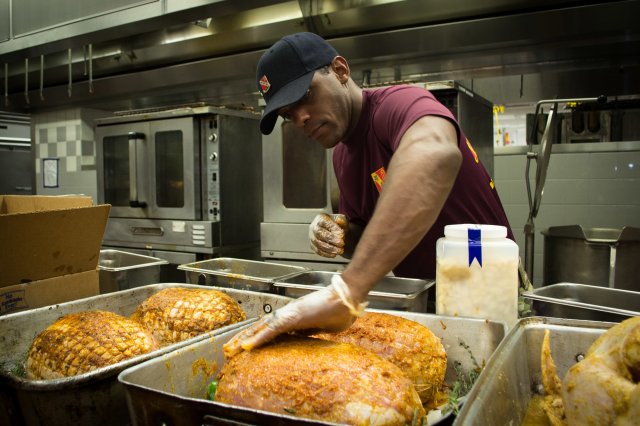 NOVEMBER 21, 2018 – Troops protecting the United States’ southern border and serving overseas will still get a “taste of home” on Thanksgiving thanks to 300,000 pounds of traditional holiday food transported to field kitchens, dining facilities and galleys around the globe.

Planning for the holiday began in May, according to Rich Faso, deputy director of the Defense Logistics Agency Troop Support’s Subsistence supply chain in Philadelphia.

“It absolutely improves morale when you can provide a little piece of home to a Soldier when they’re far away,” Skelly added.

To ensure dining facilities are fully prepared for the holiday, the DLA team worked diligently with regional vendors both locally and around the globe.

“All of [U.S. Army Central Command’s] food, with very few exceptions, has to come from U.S. sources and moved into the theater,” said Sgt. Maj. Kara Rutter, the ARCENT culinary management NCO in charge. “There are also challenges with the quantity of the food that we’re getting. When you talk about buying 23,000 pounds of shrimp, obviously that affects the entire market.

“We also have to ensure we’re respecting our host nations’ cultures. In some countries, we might not be able to serve certain foods because of cultural and religious considerations.”

Soldiers operating in isolated locations will also receive a hot Thanksgiving meal, Rutter added, thanks to food service professionals in the U.S. who prepared a series of “Unitized Group Rations,” which is “basically a meal in a box.”

“Being away from home during the holidays is very difficult,” Rutter said. “There are a lot of Soldiers, Sailors, Airmen, and Marines who frankly are away from home for their first Thanksgiving, and they are doing some difficult things.

“We want them to be able to take a minute, take a knee, and eat the same type of food that their families are eating 9,000 miles away, all while thinking of them at the same time.”