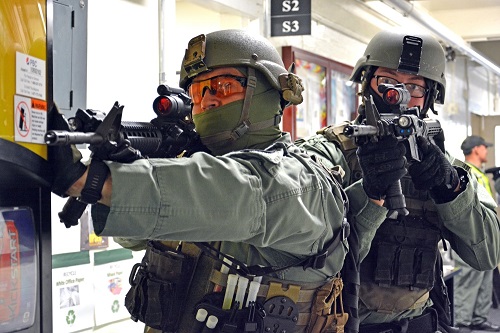 JULY 12, 2017, FORT GEORGE G. MEADE, Md. – Soon, Soldiers and civilians will be mere taps away from contacting emergency teams in the event of an active shooter. Army Training and Doctrine Command and TRADOC Capability Manager – Mobile (TCM Mobile) announced winners from a competition to develop an active shooter response mobile application for the Army. A team of civilian employees from the Aviation Center of Excellence, Fort Rucker, Alabama, submitted the winning entry.

The app will soon be released for free download from the Google Play, iTunes and other online stores.

“All these applications have the necessary and vital information that will save lives, time, and educate those with little or no training on active-shooter response situations,” said Capt. Dylan Gallagan, operations officer at the Army Office of the Provost Marshal General.

The app will add to the Army’s list of current applications that aid Soldier training, readiness and response to emergency situations. The winning entry walks users through various steps of how to respond to an active shooter and what to do when law enforcement arrives.

“If adrenaline kicks in and they forget what to do in the moment, all of that information is right there in front of them,” said Matt MacLaughlin, who works at TRADOC Senior Mobile Training Development. “It should help everybody respond to that situation in the fastest manner possible.”

Users will be able to simply tap to open the app and tap another button to reach the emergency dialer. There will also be an option to translate the app to Spanish. Final features and details of the winning application are still being determined by the Provost Marshal’s office, MacLaughlin said.

“We’re going to try to think for you,” MacLaughlin. “Because there are situations where you won’t have time to think.”

“We decided to come up with an idea that they can do after we leave so they can apply what they learned during our training and also (create) a product that would be very beneficial across the Army,” Jenkins said.

The active shooter response app follows the development of the “We Care” mobile apps created by TCM Mobile for sexual harassment prevention and suicide prevention. TCM has also produced about 80 mobile apps for other purposes, including combat training. Maclaughlin said TCM hopes to not only establish a pipeline of emergency mobile apps but also help establish a service-wide infrastructure to oversee mobile app development and training.

Part of TRADOC’s mission is to train app developers at decentralized locations to Defense Department standards.

“This can easily be expanded across the Army, so we’re just laying a blueprint down that the Army can utilize in the future,” MacLaughlin said. “So just from this one effort, the Army itself can grow exponentially in the mobile capabilities based on this effort.”

The judges evaluated the shooter app entries based on content and functionality as well as design and overall user experience, Dobbins said. There was also a competition for best logo design, won by the team from Fort Gordon, Georgia.

“We have people all the time that want to have mobile applications created and they want it … as soon as possible,” said Lt. Col. Joe Harris, TRADOC Capability Manager-Mobile. “Now that they have this capability down at the school level … decentralized creation lessens the work on this end to have the mobile application (available for use).”