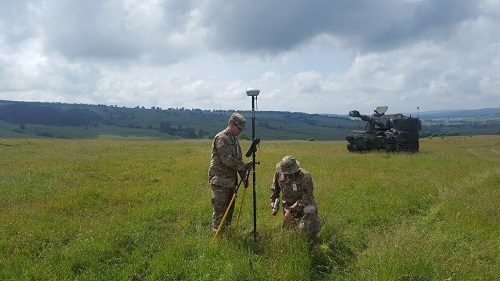 An engineer survey and design team, which normally works in support of exercise Resolute Castle 17 to improve training facilities at the Cincu Joint National Training Center, trained Soldiers of the 3rd Armored Brigade Combat Team, 4th Infantry Division, also known as the “Iron Brigade,” on how to establish a known station or control point using a Trimble R8 GPS system.

In turn, the artillerymen from the ABCT’s 3rd Battalion, 29th Field Artillery Regiment showed the engineers the capabilities of their Paladin M109A6 self-propelled artillery. The Soldiers of the 3rd Battalion, 29th Field Artillery Regiment have been in Romania for a couple weeks preparing for a fire support coordination exercise and combined arms live-fire event as part of the Getica Saber 17 exercise.

Any time a Paladin 155mm artillery system has a component replaced or is transported by rail, the crew conducts fire-control alignment tests to ensure the system’s continued integrity. These Paladins arrived to Cincu over the past two weeks from Mihail Kogalniceanu Air Base, Romania, and Germany, making the GPS training all the more timely as the ABCT’s 3rd Battalion, 29th Field Artillery Regiment prepares for a week of indirect fires with counterparts from Romania and other U.S. Army field artillery units.

“In order to do so, the Paladin needs to know its exact location on the earth and what the azimuth to multiple reference points are so they can acquire those reference points and make sure their system is displaying the correct azimuth for target acquisition,” said Mohundro, a native of Lexington, South Carolina.

The survey and design team aren’t usually tasked with these operations, but the training provided vital skills and practical benefits.

“Typically, we are conducting survey operations by collecting ground data used for the creation of detailed topographical maps, or designing and laying out roads or structures for the horizontal and vertical engineering units to build,” said Mohundro. “Additional tasks within the 12T, or technical engineer, scope of responsibilities are soil sample and analysis, concrete testing and quality control.”

The training supported both the Resolute Castle and Getica Saber exercises, which are running in conjunction with U.S. Army Europe’s Saber Guardian series of multinational exercises in the Black Sea region. The exercises, which are designed to enhance interoperability among NATO allies and partners, demonstrate solidarity in maintaining security throughout the region.

Soldiers of 3rd Battalion, 29th Field Artillery Regiment, were eager to plug in with the National Guardsmen’s GPS skills to re-verify that their Paladin targeting systems were properly calibrated.

“This is essential to mission success not only specific to target acquisition, but also for the prevention of fratricide, harm to civilians and damage to structures within the area of operation due to said targeting systems not being properly calibrated,” said Mohundro.

The ABCT artillery crews then provided the engineers a breakdown of how their Paladins operate, in an exchange of technical knowledge.

“We had no previous knowledge of the mechanized equipment,” said Spc Mark C. Hathaway, a technical engineer specialist from Seale, Alabama, who is with Headquarters and Headquarters Company, 926th Engineer Battalion, Army Reserves, out of Birmingham, Alabama.

“It was interesting to learn that our military occupation skills could be utilized for this type of calibration. The 3rd ABCT Soldiers took the time to bring us inside, educate us on the operations of the Paladin and explain why the data we were providing was so important. This was an amazing and exciting opportunity that we were proud to be a part of,” Hathaway said.