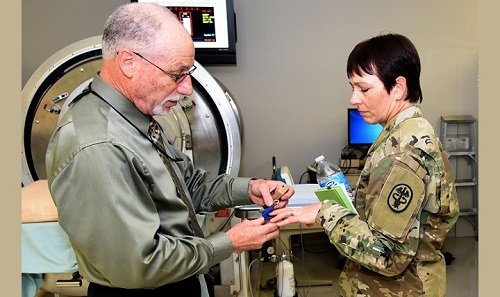 FEBRUARY 9, 2017, FORT SAM HOUSTON, Texas – The ability to measure the body’s capacity to compensate for blood loss, also known as the compensatory reserve, has been the focus of researchers at the Army Institute of Surgical Research at Fort Sam Houston, Texas, for years.

So USAISR researchers have been collaborating with scientists and engineers at the University of Colorado and Flashback Technologies, Inc., to develop an algorithm, the Compensatory Reserve Index (CRI), to detect when a patient is going into hemorrhagic shock.

The tiny device is the first medical monitoring technology capable of providing early detection of impending circulatory shock in trauma patients. The device received clearance from the Food and Drug Administration in December 2016 for use in pre-hospital and hospital settings.

“Our research has revealed that the measurement of the compensatory reserve is the single most important indicator for early and accurate assessment of imminent shock,” said Dr. Victor Convertino, USAISR senior scientist for the U.S. Army Medical Research and Materiel Command Combat Casualty Care Research Program, which funded the research.

The compensatory reserve, he explained, “represents the body’s ability to adjust for the threat of inadequate oxygen in the tissues due to blood loss.”

The CRI uses an algorithm to take information from a standard pulse oximeter placed on the finger of a patient and gauges whether a patient requires resuscitation or immediate medical attention.

Equipped with a gauge similar to a fuel gauge in a motor vehicle, the device detects when a patient is in danger of crashing or going into hemorrhagic shock. The technology is designed to assist medics without much experience working in the battlefield to care for wounded warriors who require immediate medical attention.

“[The clearance] paves the way for fielding a compensatory reserve measurement device to give combat medics on the battlefield a tool to predict hemorrhagic shock, as well as emergency medical technicians in civilian medical settings,” he said.

“The ability to measure the compensatory reserve continuously and in real time,” he added, “will revolutionize medical monitoring from early diagnosis of the trajectory toward shock to accurately guiding fluid resuscitation or providing feedback of intervention effectiveness.”

Convertino and his team were able to use the compensatory reserve algorithm to learn from an individual’s own arterial waveform how the body is using its compensatory mechanisms. The research team learned that waveforms obtained from a simple pulse oximeter that is carried by combat medics could be used to generate a compensatory reserve measurement device.

“With newly advanced computer technologies, we now have the capability to measure features of each arterial waveform that reflect the sum of all mechanisms of compensation that affect the heart [ejected wave] and the arteries [reflected wave],” Convertino explained.

With analysis of each arterial waveform, the algorithm becomes more accurate in predicting the body’s ability to protect itself from inadequate tissue oxygenation (shock).