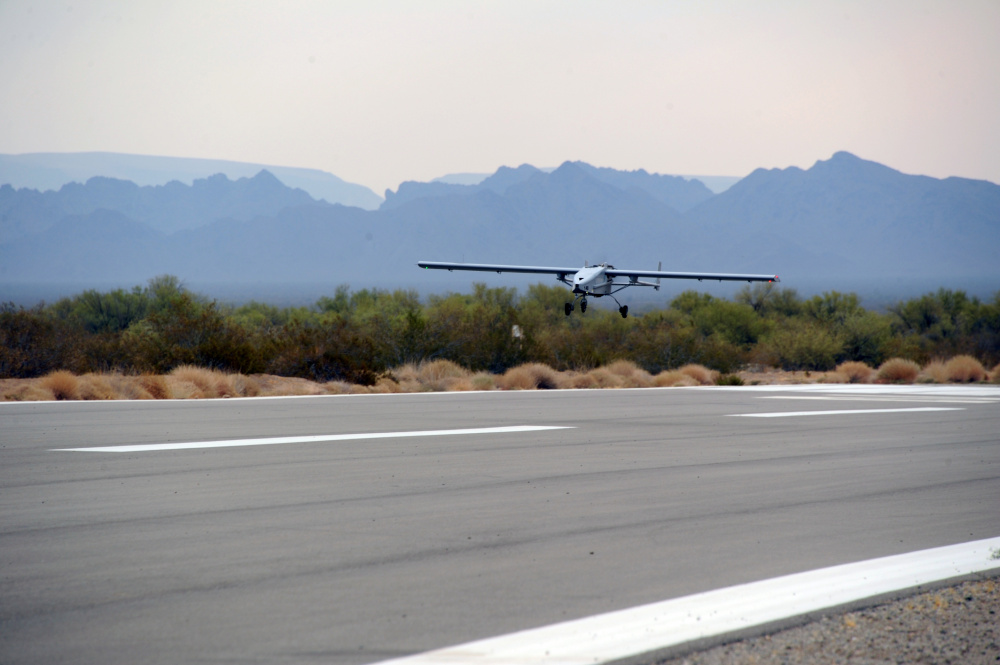 JANUARY 27, 2021 – U.S. Army Yuma Proving Ground’s position at the forefront of Army modernization has garnered immense acclaim in recent years, but its importance to developmental testing dates back decades.

One system that cut its teeth at YPG from its earliest days is the TigerShark, an unmanned aerial system (UAS) that has flown thousands of hours in combat theaters.

“The autopilot in this airframe is amazing,” said Troy Rodriguez, YPG test coordinator. “It is a reliable workhorse that is very accurate when it comes to the flight profile that is programmed into it.”

Today’s TigerShark flies many miles away from its ground controller and provides high-quality video for upwards of eight hours, both day and night, as it loiters quietly high overhead. It boasts laser radar that can see through obstructions like foliage and camouflage to produce three-dimensional images of an object. All of these capabilities were integrated into the platform over the past 15 years, and the vast majority of testing for each subsequent improvement occurred here.

“The TigerShark of today is nothing like when we started,” said David Reed, Navair electronics engineer. “When we started, it was basically a big radio-controlled toy. Now, it is a mature UAV system.”

The TigerShark was a workhorse of surveillance and reconnaissance operations in Iraq and Afghanistan between 2006 and 2014, and continues to undergo testing at YPG today.

“We’ve done over 10,000 combat missions and 75,000 flight hours in theater,” said Reed. “We’re not currently deployed in theater, but we are testing new developmental payloads for other programs of record.”

YPG’s clear, stable air and extremely dry climate along with vast institutional UAS testing knowledge makes it an attractive location to host this kind of work. Also important to the mission is the proving ground’s robust sensor-testing workload and ability to control a large swath of the radio frequency (RF) spectrum. YPG has more than 500 permanent radio frequencies, and several thousand temporary ones in a given month.

“The weather is phenomenal, and YPG has a tremendous amount of restricted airspace,” said Reed. “We have at least 330 days of good flying weather every year.”

The vast range and air space here means the testers can easily evaluate things like fuel consumption and the ability to smoothly hand-off control of the craft between controllers located in multiple ground control stations.

The TigerShark was renowned for its reliability in Southwest Asia, which testers attribute to the extensive evaluations that occurred at YPG.

“We were able to test in a similar dry, very hot desert environment,” said Reed. “Our electrical and engine systems were really up to par because of the testing we did here.”