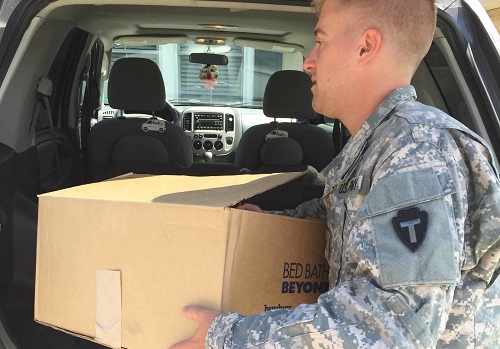 Within only two weeks, Louisiana has received over seven trillion gallons of rain since August 8. As more than 60, 000 buildings were damaged, forcing thousands of families out of their homes.

As a result, over 3,000 Louisiana Guardsmen were activated to help with flood relief across the state. Many of the soldiers called to duty had been displaced from their own home as well.

Thankfully, their neighboring partners in Texas were there to help.

This scene isn’t new to Texas Army National Guard Cadet David Williams, 149th ARB, and a current resident of Baton Rouge. Aware of the devastation that comes with flooding like this, Williams was determined to help.

“I called just about every phone number that I could get ahold of in Texas,” Williams said.

Williams, along with a few other Texas guardsmen, decided to start a supply drive for the displaced service members of Baton Rouge.

“It’s important to me because these are our brothers in arms who are answering the call, doing their duty and while they’re doing that, they are under a terrible situation,” Williams said, “loosing their own property as well.”

Williams and his fellow battle buddies coordinated the unit’s efforts, collecting three vehicle loads of supplies, including over 20 bags of clothes, appliances, tools, diapers, baby formula and food. The supplies were then transported more than 250 miles into Baton Rouge by three of the Texas guardsmen.

The donations were then sorted out by the needs of the specific guard families in a local chapel that was temporarily transitioned into a collection site.

“Some of the soldiers have over nine feet of water in their homes. I know, from personal experience after Katrina, what it is like to go through that and it’s a lot. It’s not just water going through your house. It will sit there for ‘X’ amount of days and the mud and sewage backs up and you’re going to find wildlife in your houses. It’s devastating,” Williams said.

Louisiana National Guard has rescued more than 19,040 citizens and 2,660 pets to date. As the mission transitions from life rescues and disaster relief to support and recovery, the job is not close to being over.

“What we’re looking at now is that the waters have receded and there are heroes out there, the guard members, who, throughout this whole operation have been volunteering their time at shelters, handing out food, cooking on the side of the road while people are going inside of homes, taking out all of the rotted wood and ripping out carpet and stuff like that,” said a Louisiana Guardsmen.

In the midst of dealing with the disaster themselves, the Louisiana Guardsmen can count on their Texas battle buddies to give them a helping hand.

“It’s just a case of neighbors helping neighbors, such as Texas,” said a Louisiana Guardsmen. “It’s brothers in arms. They wear the same uniform – they just have a different state attached to them in the National Guard. It’s just a great show of force and the one team, one fight mentality.”

The 149th ARB is still taking donations of clothes, hygiene items, baby supplies, appliances, food, etc. If you are in the Houston area, you can make your donation at the reserve building at Ellington Field, 14268 Scholl St., Houston, Texas 77034 or contact the Texas Military Department at ng.tx.txarng.mbx.pao@mail.mil for directions on donating.