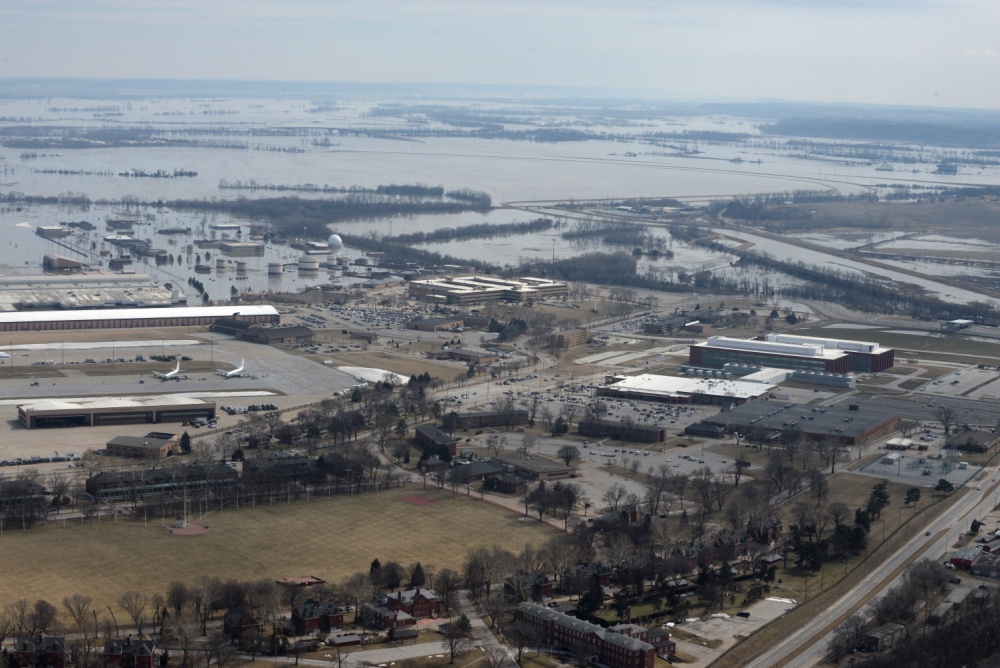 MARCH 19, 2019, Offutt Air Force Base, NE – Like large portions of Nebraska, Offutt personnel are battling flood waters which started to creep onto the installation March 15.

An increase in water levels upstream due to a record-setting snowfall this winter, in addition to a huge drop in air pressure earlier in the week, has overwhelmed the southeastern side of the base with water from the Missouri River and Papio Creek.

“Team Offutt has done an incredible job working together to battle this historic flood as best we can,” said Col. Michael Manion, 55th Wing commander. “We can’t thank our on-base mission partners enough for their support through this as well as officials from the City of Bellevue, the City of LaVista, Sarpy County, the State of Nebraska and the Omaha Public Power District.”

Base officials evacuated the Base Lake early Friday and personnel worked around the clock to fortify facilities with more than 235,000 sandbags and 460 flood barriers to minimize damage as much as possible.

All streets south and east of the Offutt Field House are impassible with water reaching roughly 30 buildings including the headquarters facilities of the 55th Wing, 55th Security Forces Squadron, 97th Intelligence Squadron, 343rd Reconnaissance Squadron as well as the Bennie L. Davis Maintenance facility among others.

“Our team worked as rapidly as possible to improve water defenses around critical infrastructure,” Manion said.

In addition, portions of the flightline are covered with water and multiple aircraft have been evacuated to other locations.

The STRATCOM Gate is also closed at this time due to water crossing the road. In response, the 55th SFS is utilizing the Meyer Gate for cargo and construction traffic and will open the Bellevue Gate fulltime on March 18.

“We’re requesting everyone’s patience as we work through this together,” Manion said. “Our defenders are working hard to keep everyone safe, so please obey all traffic control point personnel.”