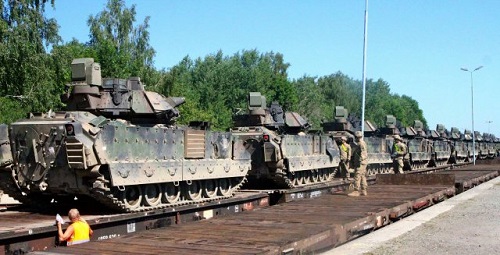 The 1st Brigade takes over the U.S. Army’s Operation Atlantic Resolve mission in Estonia, Latvia and Lithuania from Soldiers of the 2nd Cavalry Regiment while also assuming the mission in Hungary, Romania and Bulgaria.

The brigade previously took over the Atlantic Resolve mission in Poland, May 1.

“Nothing demonstrates commitment like having U.S. Soldiers and heavy armored equipment on the ground training side-by-side with our Allies,” said Col. Phil Brooks, the commander for 1st Brigade. “This is a clear demonstration of our continued commitment to the collective defense of Europe.”

As the regionally allocated force for U.S. European Command, 1st Brigade is responsible for serving as the European Rotational Force and the NATO Response Force.

This is the brigade’s third rotation to Europe since March 2015.

“We look to build on the relationships developed during our previous rotations and continue to build interoperability with our allies and partners so that we can operate seamlessly as a combined force,” said Brooks.

“A strong military alliance can help deter any real or potential threat,” said Brooks. “Operation Atlantic Resolve provides the opportunity to strengthen our deterrence by increasing the alliance’s collective readiness and responsiveness while ensuring peace in Europe.”