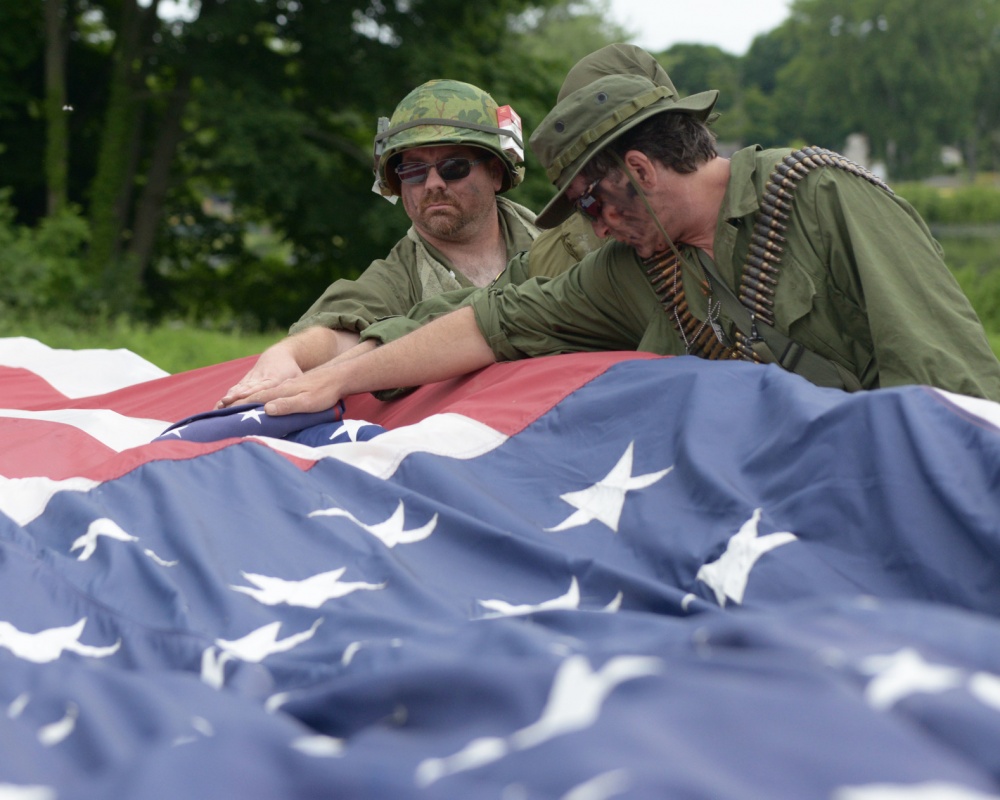 JULY 4, 2018, Meriden, CT – On June 10th, dozens of people gathered in Meriden, Conn. to watch the retirement of faded and worn American flags during the American Legion, Post 45 Disposal of Unserviceable Flags Ceremony. Many of these flags had been displayed in honor of deceased service members several years ago, while some of these flags had flown one last time in a C-130H “Hercules” aircraft on Memorial Day throughout the state of Connecticut.

The crowd gazed silently as the flags, per tradition and proper protocol, were placed in a container and ceremoniously burned. As flames consumed the tattered flags, emotions ran high throughout the crowd; some people saluted the burning flags and some shed tears.

During the summer, Americans begin their patriotic celebrations with Flag Day in June. The widespread show of patriotism continues into July with a red, white and blue, fireworks-filled finale on July 4th, Independence Day.

From streets lined with American flags, to swim suits and t-shirts covered in the stars and stripes, the flag seems to be omnipresent around this time of year. It is the most commonly displayed, and thus, the most enduring symbol of American patriotism and national independence. Barbecue pits and fireworks aside, June and July would not be the same without the flag’s constant exhibition.

For millions of Americans, the flag is more than a banner that marks the beginning of summer- time festivities; based on the sentiments of people from across the US, its symbolic significance can be summed up in one word: Sacrifice.

“It represents who we are as a nation, our freedom, liberty and the men and women who have sacrificed their lives for this country and mankind,” said Bob Williams, Jr., Commander of American Legion, Post 45, Meriden, Conn.

For Senior Master Sgt. Aaron Hann, recruiting and retention superintendent for the 103rd Airlift Wing, it means something similar.

“It means the sacrifices that generations before us made to build this country and also to protect it and keep it safe,” he said.

“It stands for the people that died and risked their lives for us, to save our country,” she said.

“A Flag may be a flimsy bit of printed gauze, or a beautiful banner of finest silk. Its intrinsic value may be trifling or great; but its real value is beyond price, for it is a precious symbol of all that we and our comrades have worked for and lived for, and died for a free Nation of free men, true to the faith of the past, devoted to the ideals and practice of Justice, Freedom and Democracy.”

Nearly a year after the declaration of independence was signed in 1776, the Continental Congress passed an act establishing an official flag for the new nation on June 14, 1777. Then, on July 4th of that same year Philadelphia held the first annual commemoration of independence.

Whether gloriously flying from a pole, or printed on a t-shirt, the ubiquitous display of the flag in June and July is a reminder that today, after 242 years, reverence for the quintessential symbol of American Independence is still alive.