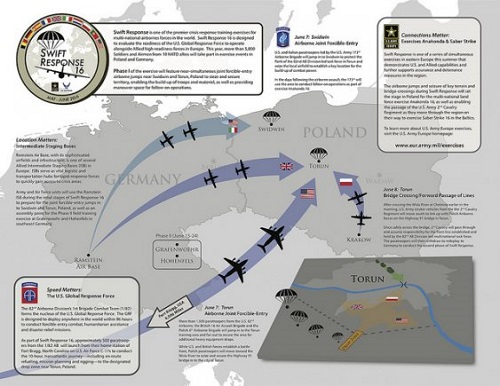 JUNE 9, 2016, TORUN, Poland – Exercise Swift Response 16 kicked in to high gear here this week as paratroopers from the British, Italian, Polish and U.S. Army conducted multiple and simultaneous airborne jumps on to the Polish countryside as a demonstration of allied rapid response capabilities.

Exercise Swift Response 2016 (SR16) is one of the premier military crisis response training events for multinational airborne forces in the world and takes place in Poland and Germany, May 27-June 24.

The training is evaluating the readiness of the core ground component of the U.S. Army’s Global Response Force (GRF) (currently the 1st Brigade Combat Team, 82nd Airborne Division out of Fort Bragg, N.C.) alongside high-readiness forces from Belgium, Germany, France, Italy, the Netherlands, Poland, Portugal, Spain, and the United Kingdom, as well as additional U.S. Army and Air Force units in Europe. The GRF provides the U.S. with the ability to deploy airborne elements anywhere in the world to respond to crisis situations within 18 hours of notification.

This is the second summer in a row that the Army’s GRF participated in Swift Response. This year the exercise involves two phases.

Phase 1 (May 27-June 9) took place primarily in Poland and featured simultaneous airborne operations: the first led by the 1/82 Airborne — which, after alerting and out-loading a battalion-sized element from Fort Bragg, N.C., conducted a transatlantic airborne Joint Forcible Entry (JFE) operation to seize key terrain alongside Polish and British paratroopers on a drop zone near Torun, Poland. The second jump included elements of the 173rd Airborne Brigade and Italian paratroopers near Swidwin, Poland.

The paratroopers near Torun then secured a bridge leading in to the city of Torun for the passage of the 2nd Cavalry Regiment the following day as that unit moved through Poland on their way to exercise Saber Strike in the Baltics.

The second phase of the exercise will take place at U.S. Army training areas in southern Germany as the airborne forces conduct a combat training center rotation as part of a 10-nation task force.