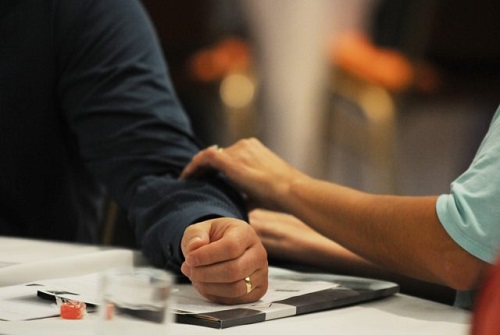 APRIL 13, 2016, FORT MCCOY, Wis. – The strength of the Army is only as strong as the relationships that support the Soldiers within it. The Army Reserve works to improve the resiliency of those relationships with a chaplain-led program called Strong Bonds.

The Strong Bonds program aims to increase Soldier and Family readiness through relationship education and skills training. These events are held at offsite retreat training and conducted for either Army Reserve Single-Soldiers, Couples, or Families.

Capt. Charles Bechtold, a Chaplain assigned to the 88th RSC, has supported more than 30 Strong Bond events and currently manages the program for the northwest region. For this event, Charles teamed with his wife Barbara who is a certified DOD Strong Bonds Master Trainer.

Together they led the couples through a nationally recognized curriculum called Prevention Relationship Enhancement Program, or PREP. The curriculum includes video and workbook-supported discussions and exercises centered on various aspects of communication, personalities and problem solving.

The 32 couples attending the event included some who had been married more than three decades and others less than three months.

Army Reserve Soldiers Spc. Bradley and Staff Sgt. Arianna Joe were just married in January and made attending the training a priority.

As a chaplain assistant, Arianna said she has supported more than 25 Strong Bonds events and knew first-hand it was something they needed to do.

“Being admin you get to hear everything people say,” said Arianna. “Every time people would talk about how it was really helpful, and how they wish they had gotten this training before they were faced with certain problems — so we were like ‘let’s get this in now before we’re confronted with any of those issues.'”

Bradley and Arianna had also attended a Single Soldier Strong Bonds event long before getting married. Bradley said that foundation had helped him in many ways.

“Everybody should go to a Strong Bonds event — even the singles.” said Bradley. “In the singles event I learned so much about myself — stuff I didn’t even know. Now we’re married and we’re learning about what we do rather than what I do, because it’s not about you and I anymore, it’s about we.”

Another couple attending the event was Spc. William Keenan and his wife Kristy who have been married for 16 years. They had gone to a family event a few years ago and decided it was now time to focus on just themselves as a couple.

“We had such a good time at the Family Strong Bonds event, and I had heard so many good things about the married couple’s training,” said William. “We do so many things as a Family, but not as a couple. So we decided this would give us a chance to have a weekend together to focus on us.”

While the event was intended for marriages of all durations, William said he thought it was really important for couples who have been married for a little while, especially people who are married and have kids.

“It’s a fresh chance to look at yourself as a couple again, whereas you may have not even thought of yourself that way in a long time,” said William. “With the many roles that you have and the hats that you wear, the father hat and the mother hat tend to dominate your identity.”

Charles said having this time to focus on each other as a couple is crucial, as are the concepts taught in the classes.

“The couples training is important, because it gives them tools for a healthy marriage and time to focus on it,” said Charles. “The big key to this weekend is learning how to communicate effectively.”

“To have effective communication, couples need to learn how to speak to each other and not past each other,” said Charles. “When they can do that – when they can communicate effectively — then their marriage is going to be stronger and healthier”

William said this kind of training was invaluable to him even after 16 years of marriage.

“It explained a lot of things to me. When you have an argument with each other, you get caught up in the argument,” said William. “So it’s hard to analyze it and think about what is really behind all that. So when you have an opportunity like this and they show you, you realize it may seem like a petty disagreement, but it’s from a much deeper issue — it was very useful.”

Barbara said it was those types of ‘ah-ha’ moments that really made being a trainer rewarding.

“We get to see those moments when couples say ‘I never considered that’ or ‘we could implement that.’ We get to see people come in with a brokenness in their marriage and leave with a sense of hope and encouragement,” said Barbara.

“It’s very rewarding being there when a couple leaves knowing that what has happened in the past does not necessarily need to dictate what’s going to happen in the future for us,” continued Barbara. “And that occurs when they begin to implement these tools and resources into their marriage.”

Charles said these events make marriages stronger and costs couples nothing except a weekend together to focus on their relationship.

“So why wouldn’t a couple want to get new tools to help make their marriage stronger?” asked Charles. “This program is completely free for Soldiers and their Families and it doesn’t cost their unit a thing — the entire thing is completely funded through the Chief of Chaplains Office.”

“We are focused on helping improve the lives of our Soldiers and their loved ones,” said Charles. “Training them on how to use these tools to create an effective marriage is vital — it’s vital to them and it’s vital to the Army Reserve.