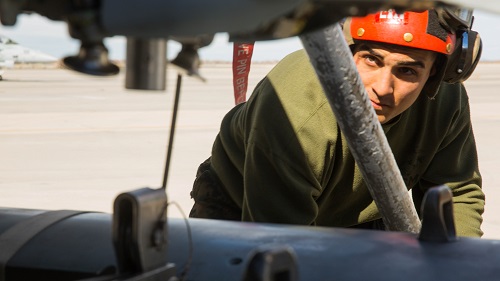 The Death Rattlers are one of two F/A-18 Hornet squadrons the Marine Corps has identified to deploy aboard aircraft carriers – and during summer 2017, VMFA-323 will deploy with CVW-11 as its only Marine aviation asset.

“Air Wing Fallon is part of the predeployment training cycle for the carrier air wing,” said Maj. Scot Foster, VMFA-323’s operations officer. “The air wing gets together and focuses on a lot of air-specific things … a lot of large-force strikes, focusing on all the mission sets of the F/A-18, as well as the other aircraft that are part of [CVW-11].”

In the Marine Corps, CVW-11’s equivalent would be a Marine aircraft group (MAG), said Alviso. It is the parent command that unites nine aircraft squadrons, including VMFA-323.

“An aircraft carrier is a very visible sign of our nation’s interests. We can park that anywhere in the world [that’s] near an ocean and show what our nation needs us to do,” said Foster. “Having the air wing aboard provides a reach-out capability: we can extend over land [and] we can extend out over the water … For us as a squadron, we want to be prepared to do that– with Air Wing Fallon itself – it gives us the opportunity to practice those skills.”

With the resources NAS Fallon provides, Sailors and Marines can fulfill many predeployment training requirements, develop rapport within CVW-11 as well as refine integration between Navy and Marine aviation assets, practicing a seamless blend between squadrons, tactical maneuvers, equipment and personnel.

“The entire air wing as a whole [is] getting together and focusing on the specific missions they may be asked to do aboard the carrier during deployment,” said Foster. “[CVW-11] is the strike asset for the carrier strike group and this gives us an opportunity to hone our skills … to be that strike-capable asset for the admiral on the ship and do what the nation needs us to do.”

The Marine Corps established VMFA-323 Aug. 1, 1943, and the Death Rattlers have served aboard Navy vessels ever since. Though the squadron occasionally deploys to land-based sites, it often supports deployments at sea, added Foster.

“As a whole, the Navy and Marine Corps generals and admirals feel that it’s good to maintain some of that continuity between Navy and Marine assets aboard the carrier,” said Foster.

When VMFA-323 completes training operations at NAS Fallon, it will move on to fulfill the next step in its predeployment training requirements and conduct training aboard the USS Nimitz.

“The nation is always going to have responsibilities for its military,” said Foster. “It’s important to train for that and prepare for that. Prior to deployment, we need to go out the door being trained and prepared for any of the tasks or missions that we may be asked to do. Air Wing Fallon is one step in that process.”