After Barbara Christianson got off work on Jan. 24, she picked up her 4-year-old grandson Nate, ran by the grocery store and McDonald’s, and headed home. Christianson’s neighbor hated when anyone parked in the street in front of her house, but that day as Christianson pulled into the driveway of her rambler home, she noticed a blue van parked there.

As soon as Christianson parked her truck, her son-in-law came out to unbuckle Nate. He seemed in a hurry and said someone was there to see her and nodded toward the van, where she could make out people inside. Christianson’s first thought was that it was the Internal Revenue Service. Then she saw two individuals dressed in green military uniforms get out of the van and begin walking up the driveway toward her.

But her only son was dead – and not from a bullet or an improvised explosive device.

Christianson screamed, ‘No!’ and dropped to her knees.

Although Cpl. Gavin Kopponen had returned from Afghanistan months ago and was only months away from completing his time in the Marine Corps, he had given his life battling the enemies within.

“My world crumbled that day,” Christianson said. “And it’s still not back together. He was my only son. He meant the world to me. I didn’t know what went wrong. We made it through Afghanistan. Why now? What happened?”

When her son came home from his deployment with 2nd Marine Division at Marine Corps Base Camp Lejeune, N.C., Christianson knew she had lost her little boy and that her son was troubled.

The things Kopponen had done and seen in Afghanistan had changed him – but he refused to talk about it.

| More: How to support a family member with PTSD. |

“Gavin was tough and never showed his pain to anyone,” Christianson said. “He said he would take the shit he saw in Afghanistan with him to his grave – and he did.”

When he did open up to his girlfriend about some of the horrors he saw in Afghanistan, he broke down in tears and his whole body shook. Finally, his girlfriend begged him to stop because she couldn’t take it anymore. It troubled him the most at night; he saw the faces of those he killed when he closed his eyes.

Being a Marine had been Kopponen’s life goal and, as the end of his active service neared, he didn’t know what he was going to do after the Corps. On top of all that, personal problems crippled Kopponen even more. The pain was too much for him. The 25-year-old took his life in his barracks room Jan. 24, 2012.

“When I think of Gavin, I hurt because I know the pain he must have felt was incredible,” Barbara said. “It was so very bad that he couldn’t live with it anymore.”

Halfway through its eleventh year of uninterrupted war, the Marine Corps continues to see the negative effects of deployments and other hardships on its Marines and their families. So far this year, 24 Marines have committed suicide and 100 suicide attempts were reported, according to Headquarters Marine Corps Suicide Prevention Program statistics. 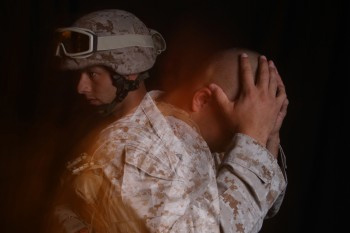 But Marines facing stress, whether combat-related or personal in nature, are not alone. Post-traumatic stress disorder, traumatic brain injuries and other mental combat injuries are prevalent among service members returning from deployment. The Marine Corps offers multiple programs such as stress management, family support groups and counseling to help Marines struggling with these stresses get the assistance they need. The key, though, is that these valuable resources can only help the Marines and families who use them.

Help protect yourself and your family by getting the help you need … before it’s too late.

“I couldn’t save my son,” Christianson said. “But I know what it feels like to have lost him. I don’t want any mother to ever feel that pain, so if I can save someone’s life, then I would do it in a heartbeat. If I had had a clue that Gavin was going to take his life, I would have driven all night to stop it. I would have done anything to prevent his death … anything.”

As Kopponen’s would-have-been 26th birthday on Aug. 9 nears, Christianson, the rest of Kopponen’s family, and his girlfriend are left with doubts and questions, as well as haunting guilt that they somehow could have prevented the death of this young Marine.

“They say his suffering is over and I believe it is,” Christianson said. “But my suffering began with the two Marines walking up my driveway. Every day is a struggle for me. Life doesn’t mean that much to me anymore. I don’t enjoy listening to the birds or seeing the sunrise. My sun set on Jan. 24 and it will never rise again. I implore Marines to please get help. Call someone: a friend, a neighbor, or anyone and everyone. Don’t give up! There are people who care about you and love you. When you give up, you don’t just take your own life, but you take theirs as well.”

If you or someone you know is struggling with stress, anxiety or suicidal thoughts, contact the anonymous Marine Corps DSTRESS line at 1-877-476-7734.