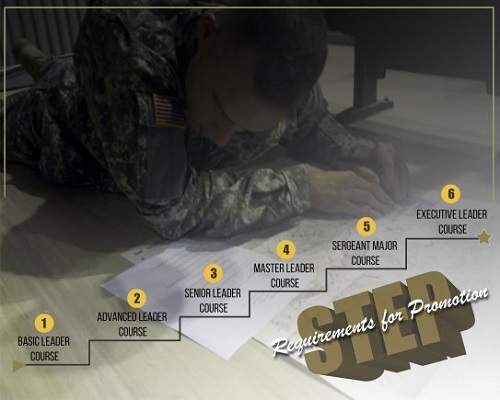 WASHINGTON (Army News Service, Feb. 19, 2016) – “The message is that STEP is important, and if you want to get promoted, you’ve got to get to school,” said Command Sgt. Maj. David S. Davenport Sr.

Davenport, who serves as the command sergeant major of U.S. Army Training and Doctrine Command, or TRADOC, spoke during a media roundtable, Feb. 17.

STEP stands for “select, train, educate, promote,” and on Jan. 1, it became the roadmap that noncommissioned officers must follow if they want to be promoted.

STEP requirements for promotion are as follows:

— Sergeants major and command sergeants major who are selected to work for general officers must additionally complete the Executive Leader Course.

The STEP program “will help our noncommissioned officers become even more professional so they can operate as adaptable leaders in the chaotic and complex world as described in the Army Operating Concept,” Davenport said.

The other important aspect of STEP is that it will provide a talent management tool “to retain and promote the best of the best,” he said.

STEP will ensure that “a Soldier’s stripes will not just be an indicator of rank or pay — it will be an indicator that each NCO has been appropriately trained as a leader,” he added.

It’s not enough that NCOs just show up for school, Davenport said. They must also display competency in the classroom.

To grade that, Department of the Army Form 1059, “Academic Evaluation Report,” has been “retooled,” he said. “We want to start talking about grade point averages, how students did on their writing assignments,” and so on. Also, there’s room on the form for instructors to write about the student’s “competency attributes while they were in the course.”

The NCOs are not the only ones who must make the grade. So too does the schoolhouse, he said.

“We’re making sure [NCOs] have a first-class experience in the classroom,” he said. “Once we have them in the school house, we have to ensure the [program of instruction] is relevant and that it has some rigor behind it and is taught by first-class instructors.”

To ensure the new Master Leader Course, or MLC, is up to par, Davenport said the Army has conducted two pilot studies and is in the process of starting a third, he said.

The first two pilots were with the Army National Guard and Army Reserve and the third will start next month with the Regular Army, he said. Once the third is complete, the MLC becomes a program of record beginning Oct. 1.

Regarding the pilots thus far, “we’ve gotten great feedback,” he said. “The Soldiers liked the rigor behind it.”

Students actually need to prepare for the class even before they arrive, he said. Soldiers who prepared said they had an edge, he noted.

Soldiers also reported liking the “reflective time” that was provided, he said. While Soldiers are given a lot of material to absorb, and that they will be later tested on, they were also given “time to absorb the material. And then we come together to process it and see how well they retained the information.”

One of the biggest misconceptions regarding MLC is that it’s like the old First Sergeant Course taught at Fort Bliss years ago, he said.

“It’s much more than that,” he said. “We’re helping them transition from that tactical level to the operational level and we’re actually exposing them to some strategic-level thought and experiences. For instance, mission command; what does that really mean and how does it differ from the old command and control?”

As of last fall, about 14,000 NCOs were “in the black-log,” meaning they were promoted to various grades in the NCO Corps, but had not received their formal PME,” Davenport said.

Since that time, the numbers have improved, with several thousand getting their professional military education (PME), and over time, the backlog should dwindle, he said.

CLEARING UP A MISCONCEPTION

During his town halls, Davenport said that a popular misconception regarding STEP is that TRADOC “doesn’t have enough capacity to get them in school. We do have the capacity.”

STEP “is the number one thing that comes up in the town halls and I think it was one of the most popular blog entries when we first announced it” last year, he noted, adding that it’s the “most emotional” topic he’s encountered thus far with NCOs.

NCOPDS reflects a new “organizational framework to develop the next generation of competent and committed NCOs,” Davenport said. “The reason we did that was so the force can understand that it’s more than just the education — it’s the experiences you get doing various jobs, it’s about stepping outside of your comfort zone, taking on a broadening assignment — ranging from drill sergeant to recruiter to working with industry — so it’s changing the entire system.”