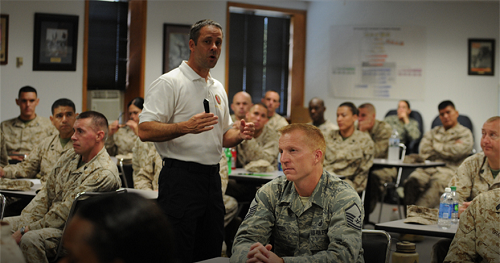 MARCH 14, 2017, WASHINGTON (AFNS) – The reenlistment and extension ineligibility requirement will be removed from the enlisted professional military education program effective March 15, 2017, according to Air Force officials.

“We continually review and evolve personnel policies to ensure it provides equity for Airmen, aligns with our Air Force strategy and supports our Airmen’s ability to execute the mission,” Grosso said. “While originally intended to drive increased development and professionalism, the previous EPME approach created a higher standard, particularly when compared to recent changes to our officer PME model. Additionally, as we grow the force the policy added unnecessary challenges and distractions to our Airmen. We certainly heard and listened to Airmen on this matter.”

The former policy stated that if an Airman exceeded the suspense date for course completion, the Airman automatically became ineligible for reenlistment or extension, until the course was complete. This meant impacted Airmen were required to separate or retire on their date of separation. Although PME completion is expected and tied to promotion, non-completion is not directly tied to continued service under the officer system. This change brings both systems back into alignment.

The policy adjustment places authority and responsibility for reenlistments back at the squadron level and provides flexibility for commanders to retain high-performing experienced Airmen who meet the Air Force’s mission needs, in line with revitalizing Air Force squadrons.

“As we work to revitalize our squadrons, it remains important that commanders and supervisors who are closest to an Airman have a say in whether or not an Airman should be allowed to re-enlist,” Grosso said. “It has been a squadron commander’s decision, and this policy adjustment restores that authority, placing the retention decision back in the hands of the local commander.”

With the change in policy, Airmen who were previously impacted due to EPME non-completion will now be eligible to re-enlist or extend (unless otherwise ineligible), and should see their ineligibility code removed from their record in the Military Personnel Data System within 24-48 hours.

“Gen. Goldfein has been clear – we succeed or fail in our missions at the squadron level where we develop, train and build Airmen,” Grosso said. “We must promote best practices, identify improvements and remove barriers, real or artificial, in order to support our squadrons – the most essential level of command.”

No changes were made to the policy regarding promotion eligibility. Grosso said that was a deliberate decision as PME is critical to the development of all Airmen, both officers and enlisted, as leaders in the profession of arms.

Airmen with questions about their individual situations are encouraged to contact the Total Force Service Center at (800) 525-0102.

Stay informed on the most current EPME information on the Force Development page on myPers, or select “Active Duty Enlisted” from the drop-down menu and search “EPME.”